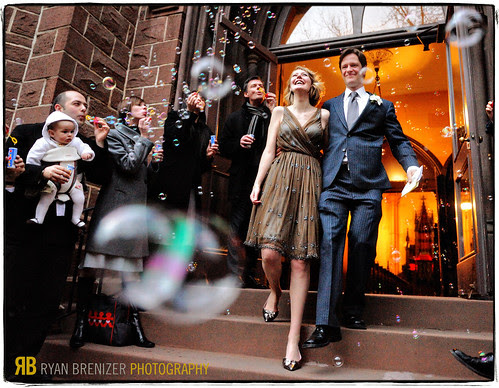 Eugene Volokh makes two points off of this picture. First, if you look at the interior of the venue, it looks like the couple got married in Hell. True. Second, he says that he likes the "non-traditional" wedding dress of the bride, but notes that they're generally worn by folks on their second or subsequent marriage.

Inexplicably, he doesn't connect these two points. Who arrives at your wedding when you engage in sinful behavior like divorce? Could it be....Satan? Apparently!
Posted by David Schraub at 5:17 PM

I once had a long discussion with two conservatives about whether it's acceptable for pregnant women to wear white. They were resoundingly against it. It ain't just divorce that conservatives find sinful -- indeed, they campaign against it a great deal less than they do premarital sex, probably because there's so much divorce amongst themselves.

(This is sometimes part of becoming "born again" and realizing the current spouse isn't going to be down with Jesus. But Jesus excused divorce only for unfaithfulness, and Paul specifically said in his letters to the Corinthians -- you know, the bit of the New Testament that gets so much play when conservatives are hating on homosexuals -- that believers who are wedded to nonbelievers, if the nonbelievers are willing to stay with them, they must not divorce the nonbelievers.)