Second Verse, Same as the First

One of the few serious disagreements I had with the Leadership Conference on Civil Rights was about the infamous Durban anti-racism conference held in 2001. The LCCR was an integral player in getting it set up, and pushed quite hard for the US to participate, while at the same time working from the other end to tamp down on the rampant anti-Semitism and make it into an event worth working with. In the end, they achieved neither goal -- the US bailed and the conference was rife with vicious anti-Semitic activity. But I found out this summer that a sequel to Durban is on the horizon. My opinion was that the event was damaged beyond repair and it would be better to let the thing die. But the word I got was that the LCCR appears willing to jump once more into the breach and try and save the conference from itself.

Unfortunately, early indicators look like I had the right instincts. A variety of NGOs are already raising alarms that the conference's tenor is, once again, going to focus solely on Israel as the supreme global purveyor of evil and darkness, and resurrect long abandoned notions that the Israeli state is facially illegitimate and primarily (if not solely) at fault for the conflict with the Palestinians. The worrisome motions are being pushed by the Asia region states, as well as the Organization of the Islamic Conference.

The NGOs are fighting to derail these motions, but I doubt they will succeed. Not only do the two groups in question comprise a lot of states, but they also are nations which wield disproportionate influence upon the various non-aligned states, making it a difficult alliance to counter. Jews, whose global influence tends to come more in the non-existent mysterious cabal form, once again stand ready to learn a lesson about how much easier international power politics is when you represent hundreds of millions of people and huge swaths of the world's land mass and resources. 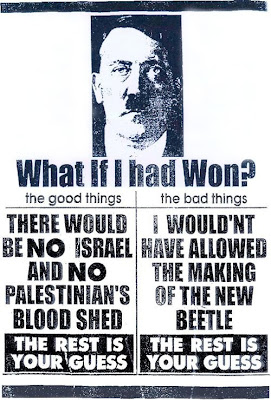 Leaflet circulated at the Durban I NGO conference. By contrast, even mild messages in support of Israel were expelled by conference organizers.
Posted by David Schraub at 4:15 PM