No, Obama is Not Going To Be The Next UN Secretary General

"There comes a point in every plot where the victim starts to suspect; and looks back, and sees a trail of events all pointing in a single direction. And when that point comes, Father had explained, the prospect of the loss may seem so unbearable, and admitting themselves tricked may seem so humiliating, that the victim will yet deny the plot, and the game may continue long after."*

Some things just seem to attract conspiracies. Jews, for one. Barack Obama, for two. The latest conspiracy theory about the latter is that he is seeking to become the next UN Secretary General. It appears to trace back to a Kuwaiti newspaper Al Jarida, which not only got the scoop but snagged exclusive quotes from senior Netanyahu aides seeking to block the appointment -- no small feat given that Kuwait and Israel have no diplomatic relations and Kuwait bars entry to anyone with an Israeli stamp on their passport. It has bounced around the usual far-right suspects -- Breitbart, Arutz Sheva, the American Spectator; some of whom admit in text that the report seems "far-fetched", others of whom go straight to the hyperventilation machine ("OBAMA COULD BECOME PRESIDENT OF THE WHOLE WORLD"). Or check out this hot take from the prominent Israeli cartoon Dry Bones: 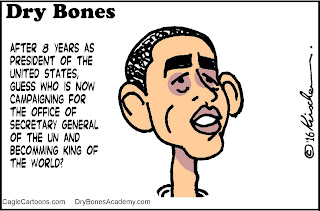 That came with a caption from the author: "Apparently it's True!!! YIKES!"

So obviously, this is in fact not true. It is rather transparently ludicrous. The story has no corroboration outside of a single Kuwaiti newspaper which has no way of getting the information it purports to have, and would certainly not be rebroadcast by Breitbart magazine in any other context.** There's no reason why Barack Obama would want a thankless position like UN Secretary General, which is about as far away from being King of the World as you can get. And, most importantly, the UN Secretary General cannot come from a citizen of any of the permanent UN Security Council members -- so Obama isn't even eligible.

Hell, even in the realm of "unrealistic high profile positions Barack Obama might want upon leaving office", there's a better candidate: United States Supreme Court Justice. There's precedent for the President-to-Justice move, in the form of William Howard Taft, and it fits better with Obama's background as a law professor and overall temperament. Of course it will never happen because Republicans would pitch a fit in the Senate, but at least it'd be the regular type of implausible.

Individual conspiracy theories aren't really interesting to me. But what I am interested in is what causes people to not just buy into conspiracy theories, but go back to the same wells over and over again. There are some people who read this on Breitbart or Dry Bones and or whatever and simply won't accept that it's not true. But there's another cadre who might accept that it isn't true, but won't engage in any reassessment about their instincts in determining who is a reliable purveyor of information and who is not. They'll continue to draw from the same sources in the same ways and get duped, over and over again. The game continues long after the plot becomes clear.

** The one thing that can over come right-wing Islamophobia and anti-Arab racism is when they can unify in hatred of Barack Obama. Then suddenly uncorroborated Kuwaiti media arms are wholly credible of resting an entire story upon.
Posted by David Schraub at 6:51 PM

"[T]he UN Secretary General cannot come from a citizen of any of the permanent UN Security Council members -- so Obama isn't even eligible."

But don't you see? This just confirms Obama's hatred of American AND his self-dealing: He denies America's exceptionalism, so he'll withdraw America from the Security Council -- thereby clearing is path to ascend the World Throne! All this was foretold allegorically in George R.R. Martin's final novel -- which explains why the novel has been suppressed! After all, even Hitler suppressed distribution of Mein Kampf when he was pursuing higher office. And since we're discussing Hitler...

Alternatively, now that Obama's administration is ending, he no longer has need of that whole "born in Hawaii" fiction so now he can embrace his Kenyan Muslim Radical Christian identity.

This is the problem with academics: They let facts and plausibility get in the way of a good story.