Every once in awhile, Jewish Voice for Peace finds an "anti-Zionist" who is in fact too anti-Semitic even for them. Alison Weir was an example from a few years ago. More recently, it was Miko Peled (an Israeli Jew who has become a vitriolic critic of the state) who stepped over the line after linking the US/Israeli aid deal to why "Jews have a reputation for being sleazy thieves." This led to the cancellation of a scheduled talk at Princeton (hosted by a pro-Palestine group) and later another at SDSU. JVP and its head Rebecca Vilkomerson lauded the move:

Peled was livid at the accusation of anti-Semitism, going so far as to threaten an SDSU student newspaper with a libel suit for publishing an editorial calling him anti-Semitic (lawyer's aside: he'd have no case, as assessments of anti-Semitism are matters of protected opinion immune from a libel action). With respect to JVP, he endorsed the sentiment that Vilkomerson was a "zionist in the closet" who needed "to be purged out of the movement for good."

In Weir's case, it took all of six months for her to start reappearing at JVP events. In Peled's case, JVP walked itself back in the space of a few days. Vilkomerson put up a new statement that agreed she had "overreached" and "clearly made a mistake" in her reaction to Peled's "sleazy thieves" comment. 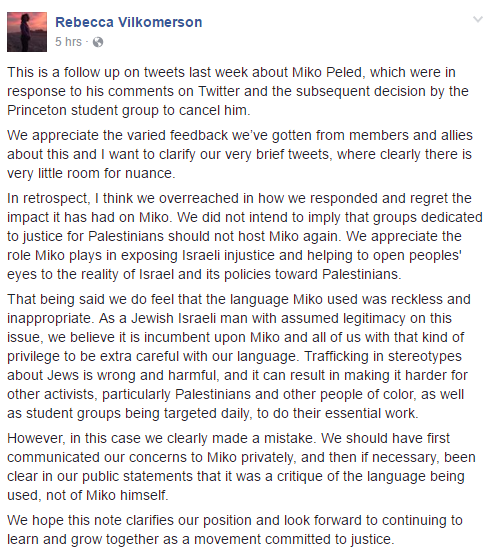 What we have here is an example of the JVP's untenable position when it comes to anti-Semitism. The problem is not that they're "critical of Israel" or even that they're anti-Zionist. The problem is that their politics about anti-Semitism are predicated on the notion that "anti-Semitism" is, in nearly all cases, a hysterical charged lobbed in bad faith by evil Zionists wanting to suppress criticism of Israel. But, having spent years hammering this message home, they're somehow surprised to discover that when they call something anti-Semitic, they're subjected to the same treatment -- dismissed as "Zionists in the closet" (Peled's allies) or "turning priorities to suit Jewish interests" (Weir's backers). They want special dispensation as the "good Jews", and they don't get it.  Instead, their "allies" treat them exactly the same as they treat every other Jew (and indeed, exactly as JVP says Jews -- other Jews, anyway -- should be treated) -- with derision, disdain, and dismissal anytime JVP tries to use its Jewish standing to challenge rather than validate their position.


Because they fail to actually acknowledge anti-Semitism as a serious and systematic problem -- indeed, because they encourage it insofar as they promote the general sentiment that Jews normally can't be trusted -- the JVP falls into a trap of its own devise. It cannot actually advocate against epistemic anti-Semitism because that would require giving credence to the bulk of the Jewish community which adopts positions they wish to see delegitimized. But having helped normalize Jewish status as epistemically unreliable, they find their pleas for a special exception (in recognition of their respectable selves) will fall on deaf ears. It turns out that, in actuality, "good behavior" doesn't in any way diminish the perceived entitlement non-Jews have to dictate Jewish behavior.

Eventually, the JVP is going to collapse under the weight of this contradiction. Again, the problem isn't that it's critical of Israel or even that it's anti-Zionist. The problem is that its power lies simultaneously in the view that Jews are untrustworthy and the view that they (JVP) are extra-trustworthy because they are Jews. The tension is sublimated so long as JVP stays in perfect lockstep with its non-Jewish allies -- JVP providing a Jewish patina to what non-Jews are already saying about Jews. But it emerges in full force and fury whenever JVP diverges from the opinions of its peers (as when they wish to challenge anti-Semitism in their movement). And the problem will only get worse. The general belief that Jews are untrustworthy, paranoid, hysterical, irrational, and/or blood-crazed cannot help but create more and more anti-Semitism of the sort that even JVP will find intolerable. But the more that JVP tries to adopt a critical rather than a vindicatory standpoint towards its "allies", the more it will see that its "credibility" as a Jewish anti-Zionist organization can't actually be drawn on.

There is space for good Jewish left-wing criticism of Israel (and plenty of groups better than JVP occupy that space: APN, J Street, and Third Narrative, to name three). But it can only work if it doesn't draw its power from a fundamentally anti-Semitic narrative of general Jewish malfeasance. For a Jewish group to take that as their foundation is wrong in its own right, of course, but it is also self-sabotaging -- a great example of De Tallyrand's famous quip that "it was worse than a crime, it was a blunder."
Posted by David Schraub at 12:58 PM