Manchild in the Prison Land

Here's a picture drawn by a nine-year old Canadian boy (or as Colorado state representative Debbie Stafford would call him, the next generation of terrorists), currently incarcerated in Hutto Prison in Texas. It's where we keep folks with immigration issues. Not crimes, usually, just administrative proceedings, but it's a prison anyway -- and one with a long record of abuse. Some of them are American citizens, who have done nothing wrong. Others are simply waiting for outstanding immigration questions (such as an amnesty application) to be resolved. It's the first time since Japanese Internment that we've imprisoned children. 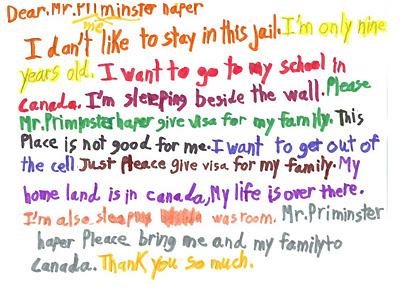 UPDATE: More information about Hutto Prison can be found in this heart-wrenching New Yorker article.

One of the things that scares me about housing innocent people -- including children -- in these prisons is that the American prison system, even in its normal operations, is hardly a model of human rights enforcement. The folks operating Hutto prison, as the New Yorker article points out, have their background in guarding prisons, not social services. Brutal things happen in prison: torture officially-sanctioned rape, Abu Gharib-esque behavior -- it's well beyond what can be justified even for hardened criminals. That it may be happening to innocent children -- many who were fleeing this sort of brutality in their home countries -- terrifies me.

UPDATE #2: Since some folks are calling his parents "criminals", and blaming them for coming to the US illegally, a quick overview about this kid's case specifically. His family is from Iran, but the fled to Canada after credible threats of political persecution (the father had allowed a friend to use his print shop to make copies of The Satanic Verses). During this time, the son was born in Canada, and is a Canadian citizen. However, Canada eventually rejected their asylum application, and they were all sent back to Iran, where they were predictably tortured. They paid $20,000 to forge some documents and try again. However, their plane was grounded in Puerto Rico after a passenger had a heart attack, and a US customs official spotted their forged documents. They were told they had to make their asylum application in the US, which they proceeded to do. However, while the process was pending, they were held in Hutto Prison.

My understanding of asylum applications is that they are made after one crosses the border. There are excellent reasons for this to be so: first, I'm not sure how one would apply for asylum while still inside a country (such as Iran) that doesn't have diplomatic relations with the US, and second, even if relations did exist it'd be rather cruel to force folks to stay in a place where they have credible fears of persecution (up to and including torture) while they wait for American bureaucratic machinery to grind along its way. So they come here, and make their pitch from within our borders.

This kid's family, of course, didn't even want to come to the US in the first place (and really, after they way they've been treated, who could blame them), but asylum seekers as a class aren't going to come with visas. If they were in a position where they could wait for a visa, they probably wouldn't be needing asylum. Calling folks such as this "criminals" is an example of a malfunctioning soul.
Posted by David Schraub at 6:05 PM

The kid's been released: "After six weeks at Hutto, the Yourdkhanis were released, and the Canadian government offered them temporary resident permits." From here: http://www.newyorker.com/reporting/2008/03/03/080303fa_fact_talbot?printable=true

Please post the picture - I only see the note he wrote

If this boy was Canadian like the article states, why did the Canadian government have to offer him a 'temporary resident permit'? There is always more to the story than what we hear.

Just because the kid is canadian, doesnt mean his parents are. That would be why they would a temporary residents permit. The US is really starting to scare me with it's "Prison Solves it All" philosophy, espicially when it involves incarcaration of Canadian citizen.

Heartbreaking on many levels. While there are often other sides to the story, in this case, the kid is Canadian - it was his parents who aren't - thus the temporary visa for them.

What's really heartbreaking is that everyone here is that no one is bothering to actually read what happened.

The family is from Iran. They were living in Canada but Canada refused their petition for asylum, and sent them back to Iran. There they were thrown in prison (the boy for six months). They came back and tried to reenter Canada again with forged paperwork. Passing through the US, an immigration official, doing his job, noticed the paperwork was fraudulent and correctly they were detained.

Then they were told that Canada wouldn't take them, but they could apply for asylum in the US, which they did. But that takes a little time and their attempt at using forged documents didn't help.

There is also no evidence they were mistreated, no matter how much you want to throw around shock value words like "Abu Gharaib".

Canada shouldn't have kicked them out in the first place. Exactly what did the US do wrong here?

You're right that Canada shouldn't have kicked them out. You're wrong that the proper response by the US to folks applying for asylum here is to house them in medium-security prison into their application is processed.

I guess the poor kid's parents didn't love him enough to enter the country legally.

The REAL issue here is, why are we housing CHILDREN and FAMILIES in a PRISON known for numerous and flagrant violations of human rights?

There are only two facilities in the US where families detained and waiting for determination are housed. One is a former nursing home, upgraded to a low-security facility. The other is Hutto, a former prison contracted by ICE. The staff and management were the former prison staff, and are not trained to deal with what are admittedly a very different sort of detainee.

Even if these people are guilty of some crime, can we as a nation condone subjecting innocent children to these conditions? Go and read the New Yorker article, then tell me how sorry I should feel for the Feds and the mess they have made.