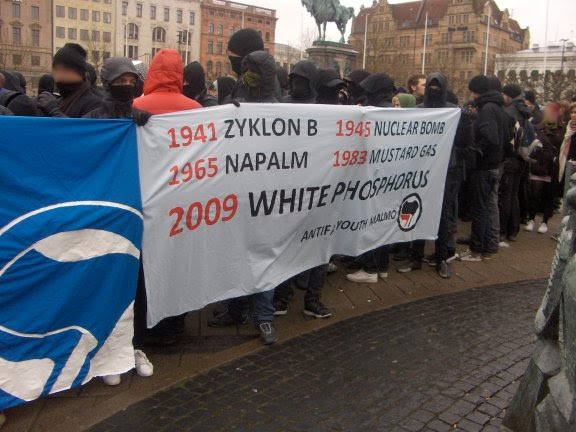 This picture, from a Swedish protest against the Israeli Davis Cup team at Malmo, Sweden (which went on to defeat the Swedish team), gets at one of the more pernicious elements in the way anti-Israel criticism operates.

Israel came under significant criticism for its use of White Phosphorus in the Gaza campaign. I'm not an expert on international law nor the law of war, so I might be wrong in the details, but here are the facts as I understand them. White Phosphorus' primary function is as an illuminating device and a smoke screen, and it is incontestably legal to use it against military target for these purposes. It also can be used as an anti-personnel device due to its potential to cause severe burns. The legality of this use is disputed, but the weight of the evidence seems to be that it is forbidden.

The critiques of Israel were not that it was using White Phosphorus as an anti-personnel device. Rather, the criticism was that it was being used (as illumination and smoke screen aides) in dense urban environments where it was known it would affect civilians. Again, the legal status of this use is open for criticism: The Convention on Certain Conventional Weapons, Protocol III (of which Israel is not a signatory to) prohibits indiscriminate incendiary attacks against military forces co-located with civilians, but exempts materials whose incendiary properties are secondary, like White Phosphorus. Still, it would be a fair claim that morally if not legally such use should be highly constrained, as the potential for unintentional damage to civilians would seem to be very high.

So, that's where I'm at: there are at least some grounds to allege that Israel used White Phosphorus in violation of the laws of war, though this is hardly beyond dispute; the case that Israel used WP in a way that isn't consistent with the highest moral standards, by contrast is much stronger. Hence, I don't think there is any problem, per se, with criticizing their usage.

But, I do think there is a problem with what the Malmo protesters compared it to. Zyklon B was the gas used in the planned, deliberate murder of millions of Jews in the Holocaust. The usage of Zyklon B was not a "war crime" in any meaningful sense, as it wasn't used in the context of a battlefield: it was just Hitler's preferred method of executing his genocide. The atomic bombings of Japan killed over 200,000 people, nearly all civilians. Napalm was used as an anti-personnel device and unlike WP its primary purpose is as an incendiary -- making its use in civilian areas a clear violation of Protocol III (the US, it's worth noting, is not a signatory either). I don't know what event they're referring to with Mustard Gas, so I can't comment on that.

Israel's WP use has not been alleged to have caused a single death, albeit severe burns on a few dozen victims. That's bad, of course, but it doesn't put it in the same breath as the other weapons on the poster. Of course, the Holocaust comparison is particularly repugnant, and in a significant way represents a form of Holocaust denial: If one can't understand why using White Phosphorus in a military campaign (which harms a handful of civilians but is responsible for zero deaths) is distinguishable from rounding up millions of civilians and gassing them to death, you clearly don't understand what the Holocaust was.

By trying to group Israel's actions into categories it clearly doesn't belong, the protesters significantly distort the terms of the debate and implicitly counsel responses to Israel's actions that would not be justifiable outside cases where they actually were doing something like napalming civilian areas. Ultimately, this is another example of criticism as moral hatred, with all the implications that flow therein.

There is very little probability that "criticism" such as this will have any meaningful impact towards creating circumstances of justice for the Israelis and Palestinians. But that is not its intent. Its intent is to externalize the bad actors as supreme evildoers, affirm that the protesters are not them by drawing strict lines between those inside and outside of society, with the latter group worthy of whatever hatred, scorn, prejudice or violence that is heaped upon them. It is primarily self-indulgent, and for that reason repugnant when actual people are suffering from the fact that too many people are content to mouth (or scream) ideological platitudes rather than work for solutions.
Posted by David Schraub at 3:00 PM

It's probably referring to the Iran-Iraq War, when Saddam gassed Iranians.

Well then ditto on that -- six figure deaths, deliberate targeting of civilians ... come on.

I can't make out the whole thing, but I'm pretty sure these protesters are with an "antifa" AKA anti-fascist organization. The only reason I point that out is because (1) anti-fascist organizers do lots of (usually highly theatrical and minimally substantive) work on the radical edge of left-wing grassroots politics and (2) that they think organizing campaigns with respect to things like police brutality and labor rights makes them some kind of contemporary analogue to the people who actually risked their lives resisting fascist regimes in Germany, France, and Italy during the WW2 era demonstrates that this is a group of people with a grossly distorted idea of their own moral and political relevance.

That doesn't make it any more fair for Israel, of course. But this is definitely a lunatic fringe type of argument. Compare for example to the HRW statement which using arguments like the ones you used, concludes that Israel should stop since its too difficult to discriminate targets in the high density Gaza area. You might think the "unlawful" language is too strong, but there its worth emphasizing that the whole point of groups like HRW is to support strongly accusatory interpretations of international law in every instance, since their goal is to use IL rhetoric as a way of protecting civilians rather than with longer-term strategic or political considerations.

The protesters are not self-indulgent or drawing a line between themselves and "evildoers".

During the early days of the Iraq war in 2003 a similar slur was directed toward American troops in Iraq.

Then as now it was completely legitimate to use as it was used. Even the International Red Cross, no real friend of Israel, acknowledged its right to used white phosphorus.

The protesters are simply lying and unwilling to acknowledge between the difference between Zyklon B used for genocidal goals and a munition used by virtually all armies for the sole purpose of demonizing Israel and Israelis and by extension Jews.

If the day comes wherein massive numbers of Israelis are killed these people will say "the Jews had it coming." Maybe a few will shed a tear, but don't count on many.

It's fair to say Israel's use of WP was the wrong move (though the fact that weapons of war hurt people is tautological. I hear bullets make nasty lacerations in flesh). The point is that WP is not like an atomic bomb or zyklon B, and saying so is a vile form of "protest" that is fundamentally self-indulgent and a form of exclusionary hatred.

Er, perhaps,but couldn't Israel's attack on Palestine be compared to the atomic bombs on Japan in the case of intent? Each were punshing many based on the acts of the government. I mean, Israel fibbed about the U.N. building filled with people saying Hamas was hiding out there.

P.S. that freeman fellow's out and Greenwald has decided to enter into the whole mess: http://www.salon.com/opinion/greenwald/

It's unfortunate he buys into the Israel lobby thing, even Noam Chomsky dismissed Walt's theory about it.

Umm ... first, of all, the UN fibbed about the UN building -- Israel hit targets across the street; even the UN admits it screwed up. Second of all, the atomic bomb wasn't bad because it was "collective punishment" (or at least, that's not what comes to my mind first off). The atomic bomb was bad because it had a six digit death toll, nearly entirely civilian. That's the comparison the protesters are trying to evoke, and it's a repugnant one.

WP was not the wrong move. The purpose of the demonstration had little to do with WP. Its purpose was to demonize Israel and attempt to restrict its ability to defend itself. If they success in stopping Israel from using WP they would simply go on to some other munition, using whatever excuse they can conjure.

The issue with the UN building is another example wherein a fact is twisted to make Israel look bad intentionally.

CC: I can't help but think you're misreading the meaning of this post. I agree that the purpose of the protest at root has nothing to do with potentially valid critiques over Israel's use of WP (and I do think there are potentially valid critiques. They also might be wrong. The point is, they're within the realm of reasonable debate.). The purpose was expression of hate.