A couple days back, Jessica Valenti posted on the creative modification of an anti-choice advertisement in the NYC subway. 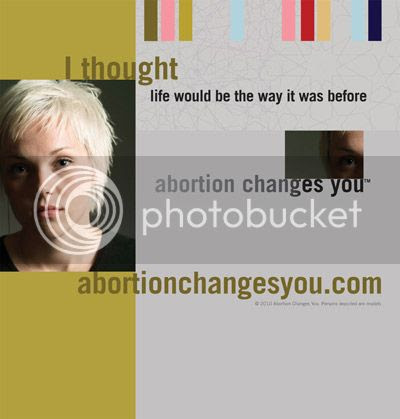 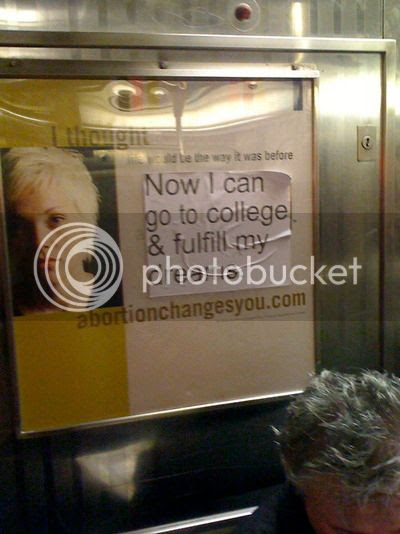 Uh-oh! Somebody at Red State is aghast:

Want to go to college, but there is a pesky baby growing inside of you? Abort! A life is far less important than your co-ed fun and career plans, right? Your dreams are all that matters, baby be damned. Can’t let that get in the way! Follow President Obama’s thinking and don’t let yourself be “punished with a baby!”
[...]
Loves encouraging abortion for convenience. Loves encouraging abortion because a baby, a human life, doesn’t fit in with your super fun college plans. Denies the trauma that abortion may cause to the woman, but rejoices at the thought of killing a baby who isn’t timely.

But you want it to be safe, legal and rare? Baloney. Willy nilly matters of convenience are not part of that definition. You have devalued life to the point where *convenience* over-rides a life itself, in your minds.

As Jessica responds, this is a rather ... odd ... diminishing of the importance of college. To be fair, the author seems to find the idea of a woman caring about her "career plans" to be ridiculous too. But by and large, the image he's putting out there is of the selfish slut-chick who wants an abortion so she can have her four years of drunken hook-ups and MTV spring break trips. Clearly, for women, college is just a chance to star in a "hot co-eds 4 u!" video.
Posted by David Schraub at 1:42 PM

To be fair, college is somewhat overrated.

In what respect is college overrated? It certainly seems to correlate heavily with higher income -- especially for women, who are less likely than men to obtain jobs that value physical strength and dexterity. College probably was the best time of my life intellectually (though by the RedState blogger's metric, I really never went to college, due to the shortage of "co-ed fun"). I have never before or since been exposed to such a variety of ideas and fields of knowledge. It was my first opportunity to write for an audience of more than a single teacher; to do primary source research; to integrate concepts from multiple disciplines.

But hey, maybe I just went to an unusually crappy high school, and the young women who are considering whether to abort have had all those experiences already and really aren't going to get much out of higher ed.

(The only respect in which I consider college to be overrated is that it seems to be used as a sorting device by some employers, where people are hired for positions such as bank tellers that could be just as well performed by a high school graduate who'd gotten a month of training on the bank's computer systems etc. But that's overrating done by people other than the college students themselves.)

College is bullshit. The vast majority of college students learn almost nothing in four years, and what little they do learn is typically useless for their careers.

As a sad example, my undergraduate economics program gave first year students and graduating students the same basic test on economics as a diagnostic to see how well the department was doing. Surprise, surprise, the two sets of exams were almost indistinguishable--most students had absorbed no material at all. And even if they had, what use would it have been? Does an accountant/social worker/chef/architect/doctor/insurance-adjuster need to know the difference between an income and substitution effect? No, of course not.

The correlation in incomes I suspect is overwhelmingly driven by the signaling effect of a four-year degree. But what an incredible waste of resources to be out six-digits and four years of your life for a signal of competence and stick-with-it-ness.

Worst of all, society stigmatizes those without degrees. Every time I hear someone blather on about how we need to get more people into four year programs I die a little inside.

[Disclaimer: The rant above only applies to four year programs. Post-high-school education is a great thing and there should be more of it. But it should be far more flexible, particularized, and useful.]

I'm on a roll here (and slightly high off of DayQuil) so let's move on to a question about abortion: If there was a 10% chance that the proposition "abortions are morally equivalent to the murder of an infant" would you be for making abortions illegal? What's your threshold probability? Higher? Lower? Rhetorical question obviously. But interesting to think about.

Impossible question, since I don't think the answers to moral questions exist "out there" and our inquiries are just our best stabs at guessing the "right" answer. Pragmatism, baby.

As for the usefulness of college, I think you're a bit harsh. First of all, I think particularly for folks coming from marginalized backgrounds, college is extremely important for its acculturation role. If you're poor, the ability to move and interact comfortably in professional, upper-class environments doesn't necessarily come naturally. It's something that needs to be taught, and college provides important experience.

I also think that college does help people become better writers, which genuinely is important. Economics departments are bad examples, because they don't actually teach useful skills, so who cares if majors actually learn anything. If they learn how to become better writers and more socially integrated, that's a pretty big success in my book.

(Asides from all that, so long as college serves as an important signal and sorting mechanism, it is really important that young women be able to attend college. So Jessica's point still holds pretty well).

Total bollocks. Acculturation could happen lots of places. Including places that don't charge you an arm and a leg while teaching you virtually nothing of value. If you want to be a better writer, take a writing class or read a book.

I'm reminded of a story my mom once told me. A girl comes home after her first year of college and her dad says "tell me something you learned at school". She says "I learned a lot about people!" Dad says, "Get a job. You can learn about people at work."

That's a little glib. Our culture is growing ever more segregated. Colleges may be imperfect at serving an integrative function, but they're one of the few that are even trying. If you're a kid hailing from a hypersegregated corner of DC, what "job" is he going to get hired for that will give him even-handed interaction with the upper classes? That's utter nonsense.

So you'd recommend a kid from a hyper-segregated corner of DC to go spend four years of his life and a pile of money, not to learn anything useful, but to go get to know rich people? Bollocks, I say. Bollocks!

And for the people not from such segregated areas? Do we agree that for them college is bullshit?

I would like to hear the evidence on "our culture is getting ever more segregated" though.

Yes. I absolutely think college is a better option than not for a kid from Anacostia. Is that even controversial? Even if I'm wrong that the writing will improve, the connections and signaling effects alone are worth it. PTN has written on this too.

I absolutely don't think that is at all obvious, and restating the conclusion won't convince me otherwise.

In a classic debate move, I'll try to sum up the points on which we agree: college, while useful for some small portion of the population, is highly overrated. You can have the last word.

Tony Henke should stop commenting while on medication, if "If there was a 10% chance that the proposition 'abortions are morally equivalent to the murder of an infant' would you be for making abortions illegal?" is his idea of interesting, or for that matter coherent. His remarks about college indicate that he completely misunderstands what most undergraduate programs take as their mission, which is not to train students for a particular job. Also, if WUSTL is particularly incompetent at teaching economics to its students -- or if its undergraduates are peculiarly stupid -- I don't understand why that means all colleges are so with regard to all fields of knowledge for all students.

I'd just like to point out that Will's original statement was "college is somewhat overrated"... hardly a barnburner. The mere fact that we can find a group of people who attended and feel it was overrated, or regret their student debt, or what have you, makes it overrated for them, and it would be wrong for me to belittle their experience just because it differs from mine. This is a case of thinking makes it so. Because one of the apparently-not "useful skills" you learn in economics is that you have to compare the road taken with "opportunity cost," and that can differ by the individual. After all, if every person or organization were the same, country A would not be better at producing widgets than country B, which is in turn better at producing guns that shoot butter, and the two of them could not trade so that they obtain the optimal number of both products.

Also higher income and the value of experience aside, the normative expectation among many that every young person must go to college is marginalizing to those that don't go, a group that is skewed, I would imagine heavily, toward the poor and to minorities.

I don't feel like getting into it more than that, but those were the things I felt were worth noting.

(Also, I am amused that a small (if obviously snarky) aside by Will that didn't even touch on the abortion angle touched off this firestorm.