Take the requirement that one use consistent metrics when labeling a graphic. This is a very basic norm of academic integrity, the sort of thing you learn in middle school. If I'm creating a chart of "Nobel Prize winners by country", we might reasonably question whether winners of the Sveriges Riksbank Prize in Economic Sciences in Memory of Alfred Nobel should count. But it is obvious that I should disclose my decision, and it is even more obvious that I can't say "they count for Russia but not for any other country." Likewise, if I'm doing a series of charts on the subject (say, one for each decade), I can't alternate between counting the Economics prize for the 1971-80 graph but not for the 1981-90 graph. And I certainly can't do any of that without disclosure -- making it clear that "I counted Russian winners of the Economics prize but not those from other countries" and/or "I included the Economics prize winners for the 1971-80 decade but not for the 1981-90 decade".

Last month, McGraw Hill withdrew a textbook because it contained a series of inaccurate maps that purported to show changes in Jewish versus Palestinian land possession over the course of the mid-20th century. Jewish Voice for Peace has a letter signed by several professors protesting that decision. It provides a convenient list of academics whose graphical representations we now know shouldn't be trusted. In all honesty, it provides a convenient list of academics who shouldn't be in academia.

Now, before we go into the details of the map series at issue, let's step back a bit. Suppose you are a conscientious academic who wanted to create a map series showing changes in "Palestinian land" and "Jewish land" over the course of the 20th century. The first thing you would do, obviously, is decide what metric you're using -- that is, what is the criteria through which lands are labeled "Jewish land" or "Palestinian land."

Of course, "de jure sovereign control" is not the only way to measure changes in Jewish versus Palestinian land. Another possibility is to look at private land ownership -- who owns the deed to particular parcels of land. This would be more difficult, but it's still theoretically doable. And we'd see some land owned by Jews, and some land owned by Palestinians, and some owned by neither (because its owned by a third party, or because it is state- rather than privately-controlled), and we could see how those proportions evolved over time. We could also do a map series defining whose land it is by reference to various international proposals that purport to allocate various lands to one group or the other. Any of these could be justified, so long as we were clear which we used and did not mix-and-match different metrics willy-nilly.

Importantly, doing this would not remove questions of interpretation or even bias. For example, if you started the "de jure control" map in 1975 and moved it to the present, it would look like the Israelis had actually ceded large swaths of territory to various groups, including the Palestinians. That would craft a very different, and arguably misleading, story compared to what emerges if you started the map series in 1946. By contrast, if you skip over the year 1975 entirely, you ignore a significant Israeli expansion in territory that it later contracted from, and that too could be said to be misleading. Likewise, the choice of one metric rather than another could be challenged for all sorts of reasons. As I said above, obeying the basic rules of academic integrity does very little to eliminate sources of academic controversy and disagreement. It is the bare minimum we can truly demand out of anyone who calls themselves a scholar.

Having said all of that, here are the maps that were challenged: 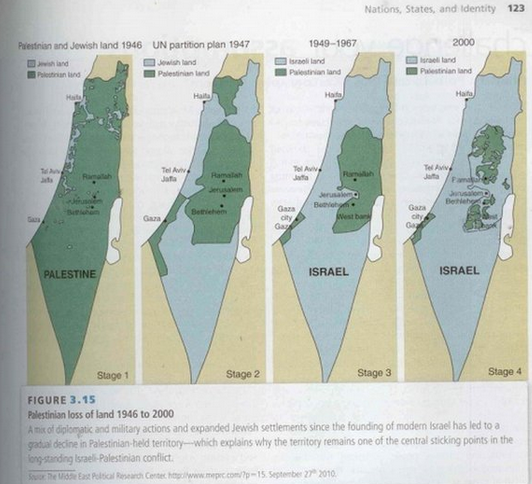 Pulling these maps, in all honesty, should not have been a controversial decision no matter what views you have on Israel and Palestine. The issue isn't that they tell an inconvenient story or pose difficult questions about the occupation. It isn't even that they are "misleading" or "biased" (though they are those things too). The issue is very straightforward: they don't use a consistent metric for what counts as "Jewish" and "Palestinian lands" (they also didn't disclose what metrics they did use -- presumably because doing so would have by necessity forced disclosure of how the metrics shift). That is flatly unacceptable for an academic work. Full stop.

Of course, since the metrics aren't disclosed, it isn't 100% clear what actually does provide the basis for why any individual plot of land on any given graph is consider "Jewish" or "Palestinian." But I think I can pretty well parse it out:


In short, we have an inconsistent (and unlabeled) hodgepodge of standards, ranging from "private ownership" to "de jure control" to "international proposals" to "anything that isn't 'Jewish land'". There is no basis -- none -- for supporting this as a remotely valid piece of academic scholarship. If a student gave me these graphics, I would probably fail them, and I'd at least consider reporting them for academic misconduct (though I'd likely end up just  giving them a stern talking-to). If a professor defends it, they're basically saying that they can't be trusted to present information in accordance with basic standards of academic integrity -- or at best, that they can't identify basic academic malpractice in cases where the sources appear to advance to their preferred political outlooks. That any professor of any ideological outlook would stand in support of this is a disgrace to our entire profession.

Posted by David Schraub at 7:28 PM

The fact is that these kinds of misrepresentations / failures of basic standards can be found all over academia which is why its bad reputation is totally earned.

The usual gang signed this letter. One of the many, many reasons that I despise Jewish Voice for Peace.

And yes, Academic Integrity counts. Arab Money, Koch, Soros or Adelson money impacting Academic Integrity? You bet it does... Sorry, Academics who promote untruth for the sake of their Ideological Prejudices? Fire them. They damage generations.