If You Can't Blame Omar ... Well, Buckle Up and Try Again

The other day, a thread by a right-wing commentator named Robby Starbuck made its way onto my Twitter feed, whipping up hysteria about "Somalis" beating up and robbing White people in Ilhan Omar's district.

If a gang of white people were targeting Somalis to brutally beat & rob them it would be the lead story at CNN, MSNBC, Washington Post & NYTimes. It’d be paraded as proof of a white supremacy problem in the country but when it’s gangs of Somalis in Ilhan’s district doing it... 🤷🏻‍♂️
— Robby Starbuck (@robbystarbuck) September 14, 2019


There are several problems with this, starting with the fact that none of the local coverage I've read says that the perpetrators are entirely or even primarily Somali, and moving onward and outward to the incredible allegation local street crime is generally national news and only isn't when the perpetrators are Black (hey, have you heard about the gang of White students who beat up a Black classmate in Florida? No? Somehow it missed out on its entitlement to being the lead story on the Washington Post!).

As it happens, I used to live a few blocks away from the area where these crimes occurred. Crime wasn't rampant, but it wasn't entirely unheard of -- especially crime of the "robbing drunk pedestrians leaving the baseball stadium and/or surrounding bars" variety, which by all accounts appears to be what happened here. It's not a race war, and the neighborhood isn't under siege. It's crime.

In any event, I noted that -- at least at the time of Starbuck's tweet -- most non-Minnesotans probably hadn't yet heard about the arson targeting a synagogue in Duluth,* probably because it occurred in Rep. Pete Stauber's (R) district and thus couldn't be pinned on Ilhan Omar. 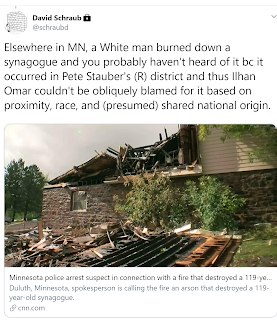 Of course, I'm giving people too much credit, because of course now I am seeing folks doing the whole "what about the synagogue fire!" at Rep. Omar -- and yet not, strangely-or-not-strangely enough, Rep. Stauber. For the record, Rep. Omar tweeted about the Duluth arson -- which occurred 150 miles away from her district -- on September 10th, while Rep. Stauber (who, to reiterate, actually represents Duluth) did so on September 12th.

Believe it or not, I don't bring that up as a "gotcha" at Rep. Stauber -- politicians move at different paces and one can always play the "why didn't you speak up on this faster" game. I raise it because it should, by all rights, conclusively falsify the notion that Omar was anything but way out in front on this tragedy, and deserves nothing but credit on it.

But it doesn't matter. Too many people, including too many people in my community, have been driven utterly, completely, unjustifiably bonkers by Ilhan Omar. It's fine to disagree with her on policy -- I disagree with her on (some) policies, most notably her backing of BDS. It's not fine to drop in on her any time something bad happens to a Jew within a 4,000 miles radius and go "Well? Well!?!" You want to talk about "tropes", or "implicit bias", or "double-standards" -- start right there and take a nice long drink from the fountain. It is a constant, ever-present feature of the discourse around Ilhan Omar, and it should sicken us.

* Following an arrest of the suspect, a local homeless man, police say they do not believe it was a hate crime. Of course, it still was a devastating loss for the Duluth Jewish community -- which had ample reason to fear that it was a hate crime, and certainly is following the ongoing investigation with interest.
Posted by David Schraub at 5:11 AM