A Picture of a Marriage 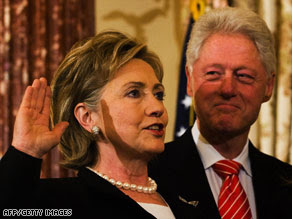 This picture, of Hillary Clinton being sworn in as Secretary of State, comes from this CNN article detailing her first overseas trip to Asia. But that's not what I want to focus on.

Look at Bill. Look at how he looks at his wife. There is tremendous pride there. And tremendous love.

The Clinton's have had a turbulent marriage, to be sure. But I'm reminded of something Mike Huckabee said about them:

Bill Clinton and Hillary went through some horrible experiences in their marriage because of some of the reckless behavior that he has admitted he had. I am not defending him on that, it’s indefensible. Just let’s not let it get lost on us that they kept their marriage together. They raised a magnificent daughter. Chelsea is truly a delightful human being…She’s polite, thoughtful, intelligent and everything you would hope a daughter to be. But they kept their marriage together. And a lot of the Republicans who have condemned them and talk about their platform of family values, interestingly, didn’t keep their own families together. Give Bill and Hillary Clinton credit for doing something we say they should have done and that is hold their marriage together in spite of enormous trials.

I don't believe, as I imagine Huckabee does, that divorce is always a bad thing. Sometimes, marriages don't work out. Sometimes, it's better for both persons if a couple splits. Sometimes, it doesn't matter if it's better for "both" persons or not -- a marriage can poisonous to one party, and they deserve the right to leave if that's the case.

However. The Clinton marriage has always been presented as two people who could barely stand each other, going through the motions to nurse their respective egomaniacal ambitions. I'm sorry, but I just don't see it. I don't. I don't see them as a couple that should have split up, and is only staying together for appearances sake.

Everything I've observed about Bill and Hillary Clinton together has demonstrated a couple that is fiercely loyal to one another, that has genuine affection for one another, and that will back the other one up no matter what. Bill Clinton's behavior was often inexcusable, but they worked beyond it, because I really think they love each other. Sometimes Bill was a little aggressive on the campaign trail -- more than I'd like -- but that's because he wanted to do everything he could to help his wife in her effort to become President, and sometimes passion makes one a little hotter than one perhaps should be. As an Obama supporter, I can forgive that.

The Clinton marriage, as I see it, is a relationship of two extremely smart, extremely committed public servants who have gone through a lot together, seen some successes, made some mistakes, and through it all, still support each other and care about each other in a deep and fundamental way.

"Chelsea is truly a delightful human being…She’s polite, thoughtful, intelligent and everything you would hope a daughter to be."

I say this with far more bile towards Huckabee than Chelsea, but this planet isn't going to change one iota until there are a lot fewer daughters out there whose first descriptor is "polite."

Esquiver-What we need is more polite sons. I'm sure your comment was more directed at relative gender roles than at politeness in general, but the way the comment was structured, and the way that such comments are often structured, hints that it would be good if women would embody a vice that is more common among men. Far from producing a better world, that would simply create a world with more combative, competitive jerks.

Like I said, I'm sure your problem is with the gender paradigm you are ascribing to Huckabee. I just don't like that phraseology and have seen it contorted to suggest that women should run right past assertive and into combative.

Let me say it clearly, then: It would be good if women embody this vice, which is more common among men.

You want a community of polite men dominating the hell out of polite women? There are any number of southern states that can accommodate you.

Women's culturally ingrained politeness is an albatross that allows the perpetuation of any number of inequities, from interruptions and the hogging of speaking time up through sexual harassment. That's not to blame women, and it's not to suggest that men can't help themselves; it's just to recognize that raising the level of politeness among men isn't going to do a damn thing to stop the troglodytes that will always walk among us. Female combativeness will.

Women's culturally ingrained politeness is an albatross that allows the perpetuation of any number of inequities, from interruptions and the hogging of speaking time up through sexual harassment.

There's a polite way to interrupt, hog speaking time and sexually harass? Southern men may be polite on the whole, but when they do those things, it's a lapse in their general etiquette and Miss Manners would approve of none of it. Men do these things because they were taught to be polite to "people," and they're not counting women as "people" but rather as a separate species to whom one owes "chivalry," which is a different critter than politeness.

The perpetuation of bad behavior by men (sometimes even by men who initially didn't want to act that way, but were pressured by the screwy culture of masculinity) will not end until men end it. That's why feminism isn't just about women. Women can pressure men, and the country can pass laws that penalize it (as with sex harassment in the workplace), but men have to choose to change themselves.

Because I've read the studies: teaching harassers/rapists to be polite results in polite harassers/rapists. And while I've got nothing against enhancing the politeness of men who aren't doing these things, they generally aren't around when the cowardly criminal ones are doing theirs.

It would be good if women embody this vice, which is more common among men.

I assumed "this vice" referred to that which makes men mistreat women (and often men who are perceived to be weak as well).

Not being large or strong, I don't respond to physical harassment with a physical threat that I'm clearly incapable of carrying out. (Though I suppose this is an argument in favor of carrying a firearm or at least mace.) I prefer the polite appeal to authority: "Excuse me, sir, but that hand belongs in your pocket and not on my rear. Should I ask the cop in the next car what she thinks?"

Good manners and abstention from violence are not the same as passivity. What are the multiple studies on how harassers/rapists could be trained to see women as human beings deserving of respect and courtesy, while remaining harassers/rapists?

it's just to recognize that raising the level of politeness among men isn't going to do a damn thing to stop the troglodytes that will always walk among us. Female combativeness will.

No, female assertiveness will.

More combativeness will just lead to more combat. People imbued with a character trait like combativeness will use it when they are in the wrong as well as when they are in the right. It's just not a good thing. It results in increased unreasonable combat. Even if all you cared about was fairness between the genders (i.e., hypothetically, you would rather have everyone live in equal constant torture than a situation where most people live fairly well, but one gender as a whole lives somewhat better than the other), you might worry that an increase in combative interactions would result in more domination of women, since men tend to be better socially and physically situated to win direct confrontations in our society, what with the upper-body strength disparities and double standards.

The ability and predilection to stick up for yourself when your rights are being interfered with is called "assertiveness." Everyone should have it. Similarly, it would be good if both genders lacked combativeness, aggressiveness, and spinelessness. That's the thing with moral virtues-what's good for the goose is good for the gander, and vice versa.

Also, rape, sexual harassment, and domination are not polite. As a virtue, it seems clear to me that politeness would be a reason not to act in those ways, although admittedly not the first or strongest reason. So I'm not sure what to make of your claim. If by "polite" you only mean "knowing how to get on smoothly in social settings," then you are referring to a skill, not a virtue, and people can choose to develop it or not based on its usefulness to them, I don’t care. But I still don’t want anyone to be combative, and don’t think crossing the line from assertive to aggressive is going to solve anything.

I generally interpret "polite" as being a virtue by which a person considers the prospect of upsetting another person without good cause to be a reason not to take a particular act. But when they have good cause, another virtue called assertiveness kicks in. This might be the source of our disagreement. I think people use the word both ways.