Requiem for a Wolverine

One of the things my American Politics students recently learned was the importance of heuristics: cognitive shortcuts we use to come to political conclusions in absence of fully researching and thinking through the issue ourselves. Endorsements are a very prominent heuristic: if I'm a liberal, and I know that such-and-such policy is supported by Barack Obama, I can have some (not total) confidence that it's a policy I'd like. If I'm a conservative, the reverse is true; I'd be more keen on a Paul Ryan endorsement.

So everyone uses heuristics, and furthermore everyone has a tendency to fall in line with their "side". That said, a functioning democracy does require some measure of independent judgment. If we simply blindly follow our party leader d'jour in a complete inversion of our prior political positions, that doesn't speak well of our ideological principles. This goes double in cases where the relevant dispute is not particularly technical -- say, disliking autocratic strongmen who are significant rivals to American international power.

With that said: The change in Vladimir Putin's American favorability over the past few months is nothing short of incredible. 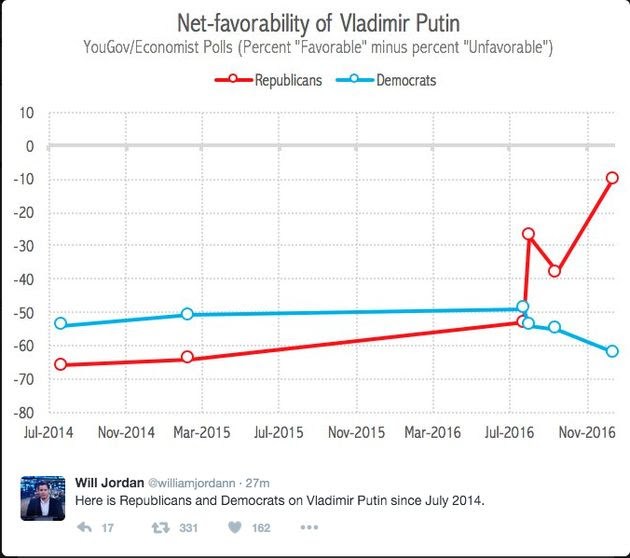 Let's just parse that for a moment. Democrats went from a net -54 favorability rating to a net -62 favorability rating. I think it's fair to attribute that drop to the Putin/Trump bromance and Russia's alleged involvement in the recent election -- aka, a heuristic. The net result was that Democrats went from overwhelmingly disliking Putin to somewhat more overwhelmingly disliking Putin.

Among Republicans, Putin went from a -66 point approval rating to -10 -- close to break-even. That is nothing short of shocking. An eight point move is not all that unreasonable taking the aforementioned heuristic effect into account. A fifty-six point swing suggests that there is nothing going on here but (a) pure partisan glee that foreign political interference benefited Republicans and (b) blind following of Trump.

It is a complete and utter abdication of any principles. Paul Mirengoff tries to put the best spin possible on this, but his ultimate conclusion is correct:


Party rank-and-file should take the views of their president, or president-elect, seriously. When they conflict with one’s own view, it isn’t wrong to take a second look.


But one can look at Vladimir Putin twenty times and the view should be the same. He is a thug, a butcher, an aggressive, serial destabilizer, and an ally of Iran.

And he's also surging in popularity among the American right. This is a sickness, and it's a sickness the right will have to cure itself.

(Some background on the reference)

Posted by David Schraub at 1:39 PM