UPDATE: Ohhhh! Katz = Cats. I totally missed it. Seriously, I did. So, not anti-Semitic (really), just completely unoriginal and unfunny. But that's nothing new for Marmaduke. 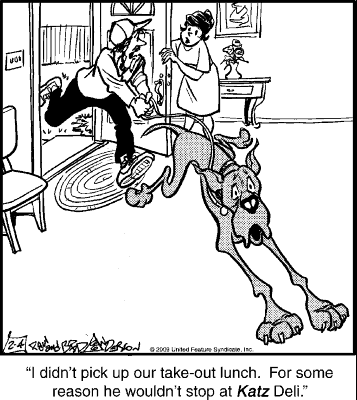 Someone today, who will not go named because she's applying for jobs and needs to preserve her reputation, told me that she likes the comic strip Marmaduke. Now, that's rather abhorrent on its own, as every Marmaduke strip boils down to "Marmaduke is a big dog. Sometimes, he interacts with his owners and guests in a creepy over-sexualized fashion."

But today's Marmaduke, while nodding in the direction of the form, takes the strip in a whole new (well, not whole new) direction -- anti-Semitism! It's not just that one could interpret Marmaduke's refusal to stop at Katz Deli as a boycott of Jews, so much as I can't think of any other way the caption makes any sense at all.

Of course, my friend didn't read Marmaduke today, so I'm sure this wasn't a commentary on her. But seriously -- what am I missing here? What is the punchline of this joke aside from "even Marmaduke wouldn't eat at a deli named Katz"?
Posted by David Schraub at 5:15 PM

Matthew said...
This comment has been removed by the author.
5:41 PM

David, love ya, but I think you're seeing Antisemitism where there is merely a failed attempt at humor. In this case, I think the joke is in the fact that "Katz" sounds like "Cat's/Cats."

As a Dane owner for over 17 years, I hate to admit that the strip's (admittedly over-tapped and drained) humor actually lies in how Danes actually act. To this cartoon's defense (how I never hoped I would say that), I have actually seen my 170 lbs. Dane take crap from my 15-20 lbs. cat. So, there's that.

When I read this post I assumed it was tongue-in-cheek. No?

I'm with Matthew; I think you need to focus on something else for a bit if you saw a strip that's entirely about the adventures of a dog, and didn't catch that Katz = cats.

In fairness to the strip writer, you might want to put the update at the top of the post instead of at the bottom, considering that you're making a fairly serious accusation.

Hey, that's not fair. Maybe a Texas goy sees "Katz" and immediately thinks "cat", but I just think of the family that sits two rows back from me at synagogue. You probably never even met a Katz until you went to UVA -- if not Columbia.

Also -- Tony was right, it was a bit tongue in cheek. Everybody's so serious!

(But yes, maybe I'm a bit primed this week).

Although, being a big fan of Dr. Katz cartoons, I would probably have the opposite reaction to Marmaduke's.

I think that's the first time I've been called a goy. Cool!

Don't we think the comic would be WAY more interesting if the character of Marmaduke WAS developed into an anti-Semite (which could presumably be done without the comic itself endorsing antisemitism)? Then we'd have jokes about a dog being big AND a subversive, Sartrean examination of hatred and otherness in middle-class America.

If you aren't already familiar, you might enjoy Garfield Minus Garfield, in which Garfield is removed from the Garfield's comics to reveal the deep existential angst and even psychosis of Jon Arbuckle.

GMG is great, but The Comics Curmudgeon has my ultimate loyalty.

I assumed he wouldn't stop at Katz deli because, if you think about it, what kind of meat would cats serve each other in their own deli--at least in a dog's imagination? Wouldn't it be dog meat?

This reminds me of something Colson Whitehead said when I went to one of his readings. He was talking about being primed to see racism everywhere, and described his reaction to a sign advertising color TVs: "Colored TVs!? ...oh, wait."