Bucking the trend in most states, the 2010 elections have drastically improved the prospects of legalizing same-sex marriage in Maryland. Democrats added 2 seats to their already-overwhelming majority in the State Senate (Republicans made mild gains in the House of Delegates, but are still outnumbered by a 2:1 margin). Moreover, shifts in committee assignments means that the key committee where same-sex marriage rights had previously been bottled up now contains a majority of gay rights supporters.

Though the effort would be subject to a filibuster, Democratic leaders are confident that it will be overcome (with the support of conservative Democrats who will vote against the bill but allow it to come to a vote). After that, it is likely that the law will be taken to a referendum in 2012. Polls are showing a slim majority of Marylanders favor marriage equality.

We'll see if this comes through, but we can only hope. The only downside I can see is that legislative passage likely means the Maryland Court of Appeals will never have occasion to reverse the blot on its record that is Conaway v. Deane. But I guess that's their problem.
Posted by David Schraub at 6:11 PM 3 comments: Links to this post

Yeah, in addition to all that stuff about this blog "an outlet for my writing and a place to hash out my thoughts", it's also a repository for anything which happens to amuse me. For example, this this this. 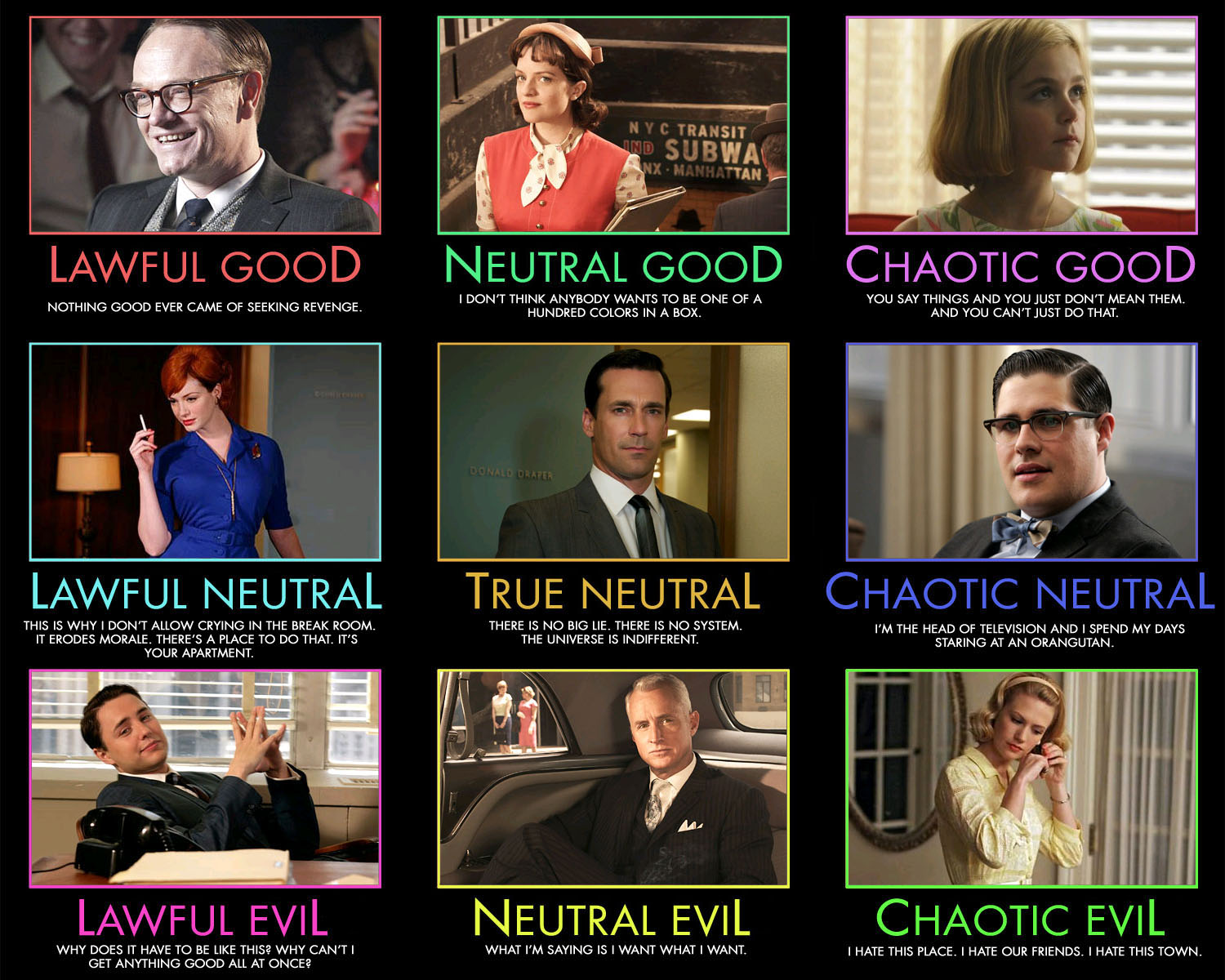 UPDATE: Rats, it's cut way off (you can't even see Betty as "Chaotic Evil!"). Click the pic for the full thing.
Posted by David Schraub at 3:03 PM 1 comment: Links to this post

1) I've become aware that blogger is eating some comments that contain URLs. It isn't doing it for my comments, and I actually do see the comments that are eaten (they're emailed to me same as all others, hence I often don't notice that they never actually make it onto the site), they just don't show for whatever reason. I don't know if I'm special as the proprietor, or if certain commenters have been flagged by the system as possible spammers. I also don't know how to fix it, and, given it's finals season and the identity of the most-affected commenters, I don't really care right now either. But I did want to register my awareness of the situation.

2) The story behind the name of this blog is simple: I was a debater in high school, and wanted to have a space where I could present arguments and sources to the debate community. Very rapidly, this blog moved away from that mission, but the name stuck (at one point I considered changing it to "The Dissenting Opinion", but I felt it was already too late. Ditto with changing the URL). Hence, the title of this blog ought not be taken as providing any explicit or implicit commitment to running my comments section in any particular way. It is, more or less, a historical accident.

At this stage, the purpose of the blog is to give me an outlet for my writing and a place to hash out my thoughts. That project is aided by intelligent interlocutors (agreeing or disagreeing). This being the internet, though, "intelligent interlocutors" are in short supply. To the extent that certain readers have historically helped deepen my understanding of issues, I'm grateful (I think those commenters know who they are, and I do wish they'd participate more often, though I understand why they don't). But I don't give participation ribbons, and don't see my comments section as an open invitation for trolls to roll in the mud with each other. My sole criterion for participation on my site via my comment threads is whether or not I, in my sole discretion, feel like there is a positive contribution being made. If one doesn't like that, Blogger is free! Start your own site. Link to me and rip/laud me to your hearts content. I may even respond. Or I may not.

Most comment boards are awful. I can think of two exceptions, Alas, a Blog, and Ta-Nehisi Coates, and it is no accident that both are heavily moderated. Unfortunately, Blogger as a platform doesn't give me the moderating tools I'd need to replicate their environment (and I don't have a broad enough readership base anyway). So unless I want to start deleting comments one-by-one, I'm forced to rely on self-regulation, and that's typically been a massive failure.
Posted by David Schraub at 2:43 PM 6 comments: Links to this post

Here's the list of who will be chairing the various House Committees.

Obviously, no Republican whose in a position to become a Committee chair is going to be someone who I'd truly like to see in the position. But there is some silver lining. John Kline on Education and Labor isn't bad -- I saw him at the first congressional hearing on employment discrimination against the transgendered, and he wasn't bad. Fred Upton on Energy and Commerce is notable because it means Rep. Joe "I'd like to apologize to BP" Barton (R-TX) isn't chairing it, which can only be a good thing.

On the other hand, there are, as expected, some catastrophes. All signs point to Darrell Issa leading a 1990s style witch-hunt against the Obama administration -- something all the more dangerous because Issa is a very smart, very effective, and very incisive Congressman. Putting Peter King -- the man who publicly wondered if Eric Holder is on the side of al-Qaeda (rich given that King is one of the few congressman who did, in fact, openly ally with actual terrorists) -- is a joke. In Lamar Smith, we have an extremist who once spoke at a conference where speakers advocating executing American judges who were insufficiently right-wing.

And then there's all the rest. Paul Ryan has a reputation for wonkishness, but it's not one that seems grounded in any actual mastery of economic facts, so much as it's grading on a massive, massive curve accounting for the anti-intellectual bent of the GOP mainstream. Ileana Ros-Lehtinen will insure that our policy towards Cuba will stay on the same failed trajectory it's been on for the past 40 years (and if that means sabotaging Israel, so be it), but other than amount of rhetoric devoted to the issue it's probably no real change. Spencer Bachus at least had the balls to call out Sarah Palin for something.
Posted by David Schraub at 9:45 PM 1 comment: Links to this post

Finals studying is taking a lot out of me, along with other annoyances on my plate. Stuff has been accumulating on my browser, but I haven't even mustered the energy for a roundup.

Texas conservatives are unhappy that their uber-conservative speaker also happens to be a Jew.

New comments by Helen Thomas about how we're all owned by the "Zionists" have prompted Detroit-Mercy to withdraw their sponsorship of a diversity award named after her.

For the last time, progressive Zionists aren't Zionists in spite of our progressivism, but because of it.

An interesting exploration of Columbia's local Palestinian solidarity chapter, and how its understanding of "solidarity" means that it institutionally refuses to communicate with the local campus Hillel (individual members are free to talk as they please, but the group has ruled out any official dialogue events to try and better understand the positions or sentiments of the Columbia Jewish community).

As time passes, it shouldn't be surprising that the taboos which might have once precluded Israel's fascist parties from associating with European fascist parties are falling away.

Israel's woefully inadequate fire responsive services may be the "Katrina moment" that finally causes the majority to recognize just how much of their resources are being squandered on Haredi subsidies and settler fantasies.

Look, it's not that complicated: Your judges are "activist", mine are "engaged".
Posted by David Schraub at 1:47 AM 33 comments: Links to this post