What Would Happen If Trump '24 Turned Against Israel

It was the "f*ck him" heard 'round the (Jewish) world. Donald Trump, in an interview, raged against former Israeli Prime Minister Bibi Netanyahu, whom he blamed for congratulating Joe Biden on his 2020 election victory. The profanity was shocking enough -- Bibi and Trump had seemingly been joined at the hip over Trump's term in office -- but the substantive appraisal was perhaps even more striking: Trump said that he came to believe that it was Abbas and the Palestinian Authority who actually desired a peace deal, and Bibi who was the recalcitrant obstructionist. From any source that'd be a noteworthy claim, given the ferocity with which the American Jewish establishment clings to the narrative of Palestinian rejectionism, but coming from Trump? It was earth-shattering.

This makes me wonder: what would happen, in terms of internal GOP political attitudes, if Trump really did in his next campaign and (God forbid) administration demonstrate hostility to Israel?

I'm not saying this is guaranteed or even especially likely. But it's hardly impossible. Trump is notorious for keeping grudges, and this one is a doozy. Moreover, the dark reactionary currents that represent Trump's deepest well of support is viciously antisemitic and growing more so. Many in that cadre unsurprisingly harbor no love for the Jewish state. Even for those who sometimes gesture at a perceived shared ethnonationalist values, the "love" for Israel is thin and easily cracked. Israel's standing in a new illiberal world order would be precarious indeed.

For those reasons (among others), I've long believed that it is more-or-less an accident of consanguinity that Trump was not even more antisemitic than he was. I have no idea the degree to which Kushner (or Greenblatt or Friedman) remain in or out of the Trumpist inner circle these days. But in terms of his own instincts, there is plenty of gravitational pull where "America First" means no longer standing at attention to the Zionist globalist puppet-masters who've been pulling our strings for too long. Couple that with a feral desire to get back at those who wronged him, and one can easily imagine a new Trumpist approach towards Israel that is exceptionally hostile.

Of course, this would all run against the decided weight of recent Republican Party orthodoxy, which is deeply wedded to its identity as "pro-Israel". So the big question is whether the strength of Trump's cult of personality -- and what is the GOP these days if not a cult? -- can crack these attachments. And I think the chances would be decent. Republican voters have evinced a marked ability to turn on a dime when it comes to perceptions of foreign policy .... 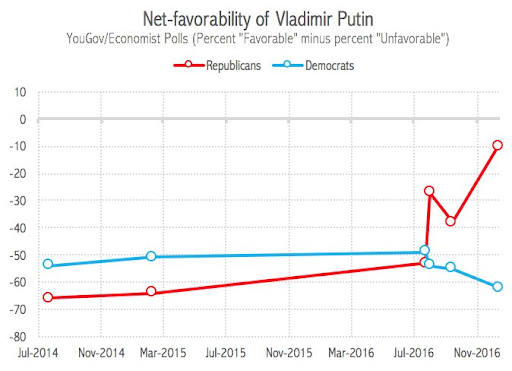 ... and it's hard to see why Israel should prove immune here. Indeed, there's a pretty common pattern that's emerged when Trump takes actions that clash with putative commitments of GOP party elites:
We saw this with the Muslim ban, with the sexual assault allegations, with the attempts to overturn the election, and with the January 6 insurrection. Every time Trump appears to cross a conservative red line, it turns out that there are no red lines. Maybe the attachment of GOP voters to Israel is so intense it resists these tides where nothing else has proven able to do so. But would you really bet on it? Again, current conservative identification with Israel notwithstanding, there are plenty of resources within MAGA ideology that easily could support a new, anti-Israel slant (one that would, invariably, stand side-by-side with an accelerated anti-Jewish slant).
One can easily imagine how it will go. A few weeks or months of "very concerned" faces from the usual GOP subjects, the slow, shocked processing of the fact that none of their voters actually care about the things they thought they did, and eventually, the familiar sycophantic mewling that has become the signature tune of the contemporary Republican "leader". The only major question is how many Nikki Haley Units it will take for the median GOP politician to fall back into line.
Posted by David Schraub at 2:18 AM