Panic! At the ADL

Rep. Keith Ellison (D-MN) is running for DNC chair. The ADL has thoughts on this.

There are concerns, but there's also much that's positive in Congressman Ellison's record. The concerns should be addressed, the positives should be acknowledged, and at all points the conversation should be open, fair, and free of race- or faith-based innuendos.

Not everyone likes thoughtful, balanced statements. ZOA had come out swinging against "Congressman Keith Ellison a/k/a Keith X. Ellison a/k/a Keith Hakim a/k/a Keith Ellison Muhammed."  They were not happy that the ADL refused to jump on the bandwagon, and weren't shy about claiming "double-standard" since the ADL had condemned Steve Bannon (my post on the matter explains why I think that's a bogus comparison). Three days later, feeling the pressure, Greenblatt backtracked a little.


“The United States foreign policy in the Middle East is governed by what is good or bad through a country of 7 million people,” Ellison is heard saying. “A region of 350 million all turns on a country of 7 million. Does that make sense? Is that logic? Right? When the Americans who trace their roots back to those 350 million get involved, everything changes. Can I say that again?”

Now, we could say that the IPT -- last seen bringing us that ridiculous "Muslim no-go zones" bit on Fox -- might not be a source worth taking at face value. We could express skepticism of whether that bit provides the full context. Nonetheless, I think it is fair from that clip to express worries. These are, indeed, worrisome remarks. They are a reasonable addition to the inquiry that Jewish and pro-Israel groups might wish to make into Congressman Ellison's candidacy. He should be asked to address them, and address them seriously. And an unsatisfactory answer would be a cause for deep concern.

So the ADL issued another statement. It starts off fine. It recaps its previous analysis. It quotes the newly released material, which it says "raises serious concerns about whether Rep. Ellison faithfully could represent the Democratic Party’s traditional support for a strong and secure Israel." And then it says that

See, this is what happens when mainline Jewish groups have become conditioned to flinch each time right-wing groups go "boo!" They trip over themselves to show they're not "soft", and end up getting trapped in ill-thought out, ill-advised, and uncompromising positions.

It would have been absolutely appropriate to raise these concerns, note that they raise serious questions, and then say "these comments demand a serious and thorough explanation from Congressman Ellison, which we will review very carefully" -- without flying straight into the "disqualifying" wall. Maybe Congressman Ellison would have a response that would assuage our justified concerns. Or maybe his response would be terrible, fully vindicating a conclusion that he cannot be supported in good conscience! Either way, notice how not locking oneself into a permanent position based on a brief audio-clip from six years ago leaked by a hatchet operation gives you a much nicer array of options.  Putting aside whether it was fair to Ellison or not, taking away your own leeway to respond to any further developments is the definition of amateur hour. To quote de Talleyrand: "It's worse than a crime, it's a blunder."

But no. The ADL panicked, and decided it was done without any consultation whatsoever. And now they're stuck. Fabulous work, guys -- this is why you're the professionals.

The really amazing thing is that Congressman Ellison's reply is far, far kinder than the ADL had any right to expect. 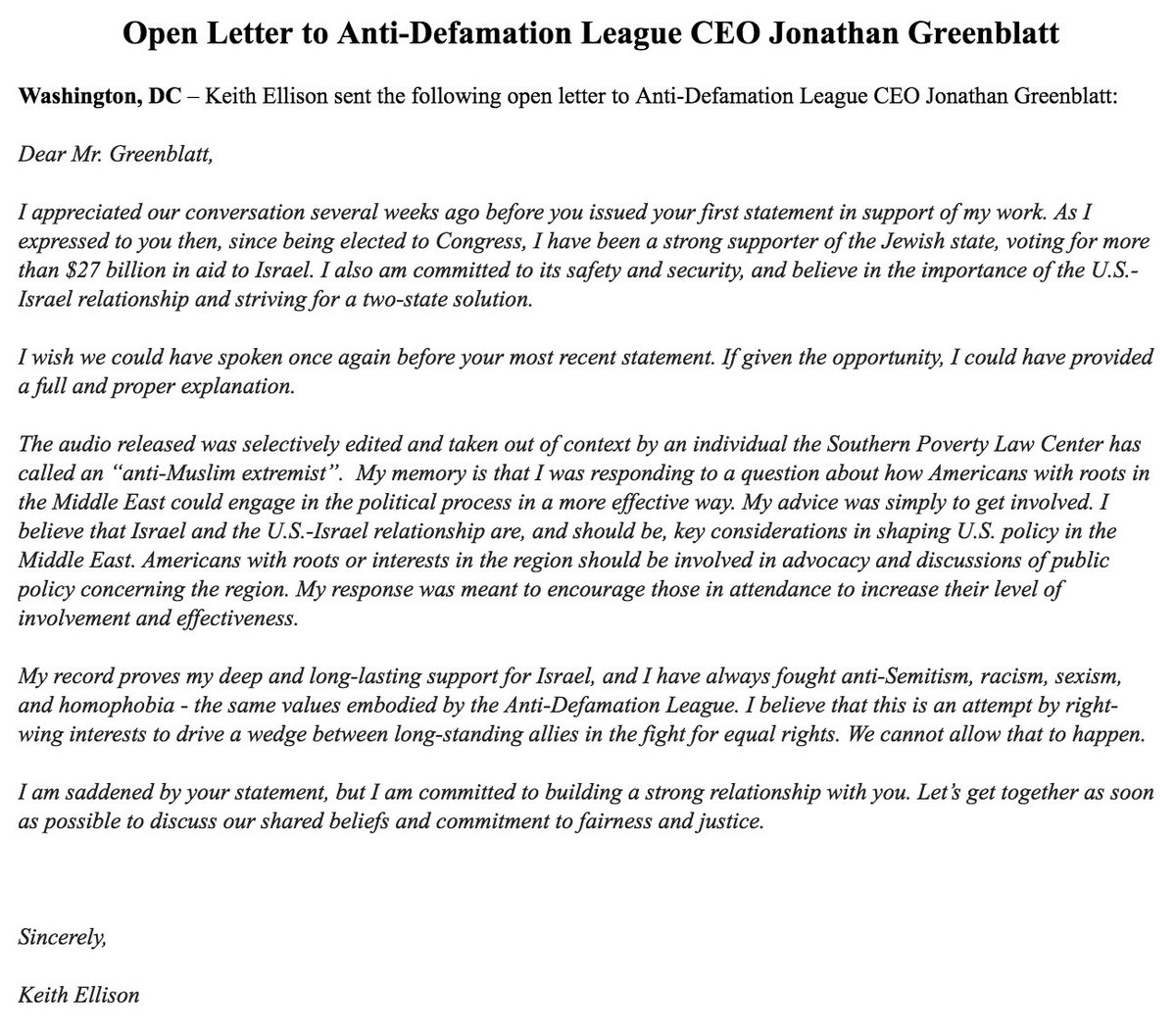 This would have been a great letter had the ADL not elected to do the bull-in-a-china-shop thing. That it was issued after the ADL did so is the sort of gift from God that I hope the ADL is privately thanking each and every lucky star for. If they're supremely lucky, they can restart this conversation the way it should have happened all along.

And yes, one element of that conversation should be to interrogate Congressman Ellison's statements. That's part of the tragedy here: the ADL's panic has deeply tainted the discussion we should have had. Ellison's comments were problematic. Perhaps context would mitigate their apparent meaning, perhaps not. Regardless, it would be worthwhile to explain, clearly and explicitly, why they were so troublesome, and see how he took that critique. I am not someone who will ever say that we should fail to call out anti-Semitism or troublesome tropes when we see them, and Keith Ellison is no exception to that rule.

But there's no rule that vigorous opposition to anti-Semitism requires that one be an idiot about it. Part of the job of combating anti-Semitism is getting people who have made problematic remarks to disavow them and return to the fold. Groups like ZOA make that harder, because they rather the Jewish state have enemies they hate than for it to have allies they detest, so their strongest efforts are to ensure that Israel and the Jewish community stays in a constant state of implacable warfare against anyone to the left of Naftali Bennett. It's bad for Israel, and it's bad for the Jews. Yet the institutional Jewish community has a reflexive instinct to coddle a tiny right flank whose volume is grotesquely out of proportion to its numbers. Until the ADL weans itself from this habit, it's going to keep making very basic mistakes that undermine its effectiveness as an organization and its credibility as a Jewish communal leader.
Posted by David Schraub at 9:58 PM

Anonymous said...
This comment has been removed by the author.
2:30 PM

You also had a problem with the ADL's second statement, which was respectful but concerned. Now we have a classic conspiracy theory statement from Ellison, made after he allegedly rejected conspiracy theories. Sure, I very much want to hear the whole thing. But let's face it. It is very bad stuff.

Yeah, the full tape provides context, it makes plain that Ellison not only endorses the theory that Israel controls the US via "diaspora" Jews, it explains that he was pitching for contributions to launch a counter offensive on behalf of Muslims. Not encouraging.

"When you see that that country has mobilized its Diaspora in America to do its bidding in America. The question is, with all of us here, we ought to be able to do at least as much."