There are more immediate and visceral problems, but at some level the single scariest chart coming out of Israel might be this (from 2019, but I've seen little to suggest it isn't still accurate): 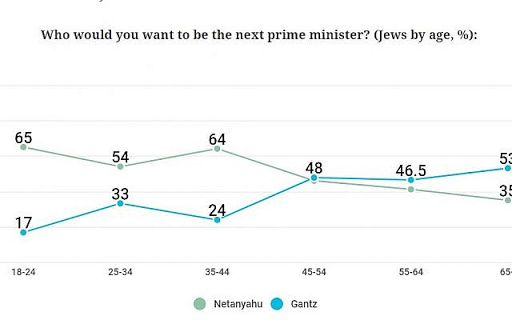 In Israel, Jewish youth are massively, disproportionately, wildly right-wing. Support for Bibi is just the tip of the iceberg -- young Jewish voters show burgeoning support for outright hatred of Arabs, up to and including stripping Israeli Arabs of citizenship and/or voting rights. The precipitous fall of Labor in some ways is simply the story of this chart -- its voters are old, and dying, and they're being replaced by increasingly one-sided right-wing cohorts.

It's not just that the "cavalry isn't coming", though there is that. The American story that someday soon the old racists will die off and be replaced by progressive youth was always too pat, but imagine how much worse we'd be if the demographics were flipped (one of the millennial founders of IfNotNow said that Gen Z Israel activists make folks like him look "f*cking reformist" -- imagine that dynamic, but on the right).

But the problem is more than just the inability to sit back and let demographic tides do their work. Political parties, first and foremost, try to get elected. And from that vantage point, Likud and the right-wing coalition have to view the past decade or so as a rousing success. They've entrenched themselves as the dominant faction in Israeli politics (even the "anti-Bibi" bloc which may or may not finally succeed in turning him out of office is dependent on considerable right-wing support, up to and including possibly installing Naftali Bennett in the PM's office). Whatever social dynamics in Israel are creating this state affairs, they probably want to keep up.

And that's a capital-p Problem. It's not wrong to say that the international community has not done its job in bolstering the Israeli left. But when one sees gaps like this, I struggle to imagine what sorts of interventions from the outside could even make significant dent in the left/right gap. Even if we reframe the issue in nominally non-partisan terms -- we need to support deradicalization policies that promote trust and collaboration between Israelis and Palestinians and which create space for more moderate leadership and politics to take root -- the glaring issue is that the status quo is good for the current Israeli leadership. And, by extension, attempts to alter that status quo pose a threat to the current Israeli leadership -- an Israel where there is widespread faith in the possibility of a genuine, just, negotiated settlement and where peaceful coexistence seems within reach is one where that leadership probably won't enjoy the massive political advantage it holds now.

In short: the current dominant political coalition in Israel is likely to be an opponent of even seemingly anodyne measures to promote coexistence and mutual trust between Jews and Palestinians (and Israeli Arabs, for that matter), because the lesson of the past decade is that an Israel where Jews are keyed up to believe coexistence is impossible and trust is a sucker's game is an Israel where they can win election after election. And frankly, I don't have good ideas of how to circumvent that.

What is clear is that it has to be circumvented -- the sad fact is that the best interventions are almost certainly going to be ones that try to sidestep the Israeli government outright and focus on direct engagement (whether that's peer-to-peer work, exchange programs, NGO investment, or something else). But we need to be on alert that it's highly likely that the Israeli government will do its level best to sabotage these efforts. We should view Israel's "anti-BDS" visa law in that light, we should view the nation-state law in that light, we should view the assaults on Israeli universities and the cultural sector in that light, we should view all the various ways that the Israeli government has demonized and rabble-roused against peace-seeking initiatives and NGOs for years now in that light. It is part of a fight that's been waged for years now to ensure that the status quo which has given Likud and its allies powers stays the status quo. And let's be clear: right now, it's a fight they're winning, and we're losing.

Posted by David Schraub at 4:56 PM