Sometimes, when we talk about racial injustice in America, we instinctively think about the American South. And sometimes, when trying to check that instinct, we say things like "sure, things are worse in the South -- but it's actually a problem nationwide."

But it's not always the case that the South is the worst offender. A very interesting post about comparative racial incarceration rates indicates that it may be the upper Midwest -- embodied by my beloved Minnesota -- that actually has the greatest incarceration problem. 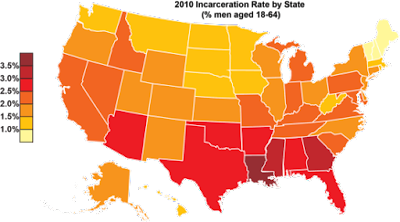 The first graphic perhaps bolsters our intuitive notions about the South -- its overall incarceration rate seems far higher than the rest of the country. But if we zoom in solely on the Black male incarceration rate, that gets blurrier. 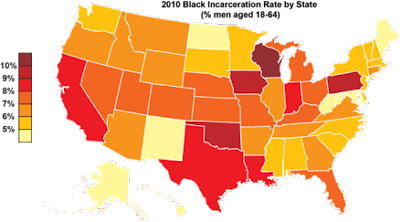 Here the evidence is more mixed: Some Southern states (Texas, Oklahoma, Louisiana) continue to do poorly -- but they're joined by states like Iowa, Wisconsin, and Pennsylvania. But even this graphic might be misleading, since it doesn't provide a comparative account of how many Black men are in jail versus their White fellows. Oklahoma, for example, seems to throw everyone in prison -- so it stands to reason that it puts a lot of Black people in prison too. 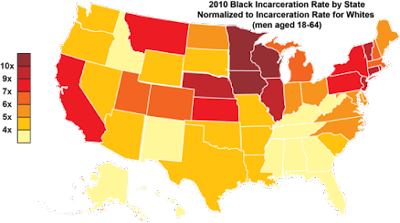 This graphic showcases the Black incarceration rate as compared to the White incarceration rate in each state. And here we can see how the center of gravity shifts decisively to the north, and particularly the upper-Midwest. Minnesota, for example, doesn't really imprison that many people -- but if you are in jail, you're almost certainly Black (or another racial minority -- Minnesota distinguishes itself for having a massive disparity not just for African-Americans, but for Latinos and Native Americans as well).


Now to be sure, we can debate whether the most important metric is the overall percentage of Black men put in prison, or the comparative Black/White figures. One could object that it is strange to excuse Oklahoma's mass incarceration of Black men by observing that it imprisons a ton of White men too. Much of the South performs "well" in the last graph simply because it has elected to pursue a mass incarceration strategy for everybody, and it's hardly a given that this decision is worth lauding. But certainly, these comparative figures are a relevant data point. And they're one where the South significantly outperforms many of its northern peer states. Those of us interested in racial justice need to own up to that.
Posted by David Schraub at 2:43 PM