No News is Good News When It Comes To Polling Jews

There's a new survey out of Jewish voters, and it's chock full of interesting information. The most interesting parts, however, are how normal it is. Every election cycle, it seems, we get a new flurry of psyched-up conservative theorizing insisting that this will be the year that Jews abandon Democrats. And every year, it turns out that Jews still overwhelmingly support Democrats.

To go into some more detail:


At least as far as the general election goes, there is no significant "NeverBernie" movement in the Jewish community to speak of. So yeah, I will screenshot that tweet: 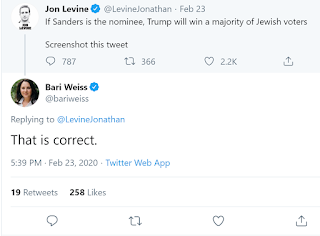 More broadly: I've seen a ton of folks on social media saying things like "Jews don't trust Bernie -- he's only got 11% support in the primary!" These were always misleading and now have been pretty decisively refuted. There's a difference between not being one's top primary choice and being outright mistrusted, let alone being someone who one would vote for Trump over. Jews may not be as keen on Sanders compared to his Democratic competition, but most still like him and we certainly like him a heck of a lot more than Trump.

(As to why Pete Buttigieg is so popular, my hypothesis is that Pete -- whatever else you might say about him -- certainly has serious "such a nice young man!" energy).

Some other high-profile conclusions from the poll are likewise not-news to those in the know. Yes, the vast majority of Jews identify broadly as "pro-Israel". No, this doesn't mean they support the Israeli government uncritically, nor does Israel rank particularly highly as a voting criteria compared to more traditional issues like healthcare or the economy. Again, this is all more-of-the-same behavior from the American Jewish electorate.

So what is at least a little more noteworthy? Well, most Jews feel that both they personally and Jews generally are less safe than they were two years ago. 71% of Jews disapprove of how Donald Trump has handled the issue of "Anti-Semitism/White Nationalism" -- his single worst performance on any issue area -- and 56% say he's at least partially to blame for synagogue shootings. This corresponds to a broader repudiation of Trump in essentially every major domestic policy arena -- his disapprovals are upwards of 60% on issues ranging from taxes to health care to guns to reproductive freedom.

Another point of interest is that President Trump's issue-approvals are strongest (which is distinguishable from "strong") on Israel-related issues. The only two issues where Trump enjoys the approval of a majority of Jews is on "US-Israel relations" (51%) and recognition of Israeli sovereignty over the Golan Heights (52%). Moving the embassy to Jerusalem and "support for Israel annexing the West Bank" generate sharp divisions, with narrow pluralities favoring Trump here too. On annexation, in particular, this is one figure which I was genuinely surprised to see, as this seems to indicate far higher support for annexation in the Jewish community than I'd have predicted. That it's refracted through the lens of "do you approve of Donald Trump's performance on..." is unfortunate and creates a potential for blurring, but nonetheless it is a striking data point worth digging into more.

Nonetheless, even these numbers suggest that near wall-to-wall Jewish identification as "pro-Israel" yields immense diversity in opinions on specific issues. Jews are very much divided on questions like whether the embassy move was a good idea, and that division is one that largely is operating within those of us identifying as pro-Israel. This, too, should not be surprising for those of us in the know.
Posted by David Schraub at 8:23 PM