A Tale of Two Protests

I don't know if I've said this before, but I think one of the key reasons why the public largely stayed supportive of BLM protesters in the wake of violent police responses is that they occurred just weeks after we all saw right-wing protests over COVID restrictions being met with sober police restraint.

When the far-right began swarming state capitals and government buildings with assault rifles and far-right insignia, screaming about their God-given right to not do the bare minimum to keep their fellow Americans uninfected by a deadly pandemic, the police by and large stood back. They didn't start shooting tear gas and pepper spray. They didn't wade in and start bludgeoning people. There were no mass arrests. And at the time, when all of that didn't happen, I think many more establishment-minded observers viewed that as proof of policing professionalism. "They're doing their job. They don't have to support a protest to defend a right to protest. Even when people are acting manifestly crazy, the police shouldn't escalate the situation. Kudos." 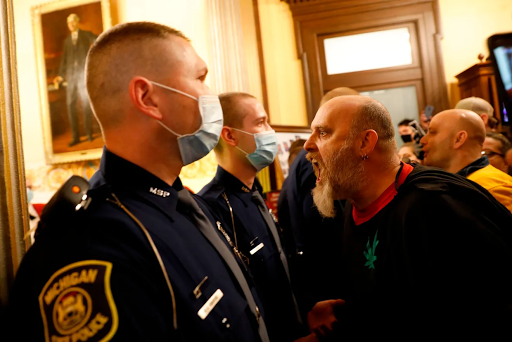 And then, immediately after, we had another round of protests: this time about the right of Black citizens not to be executed by armed agents of the state (or -- just as bad -- yahoo vigilantes who view themselves as proxy agents of the states). And the contrast in terms of the police response couldn't have been starker. Right after we had a demonstration of how the police could stay restrained in the face of protests if they wanted to, we saw a demonstration of how the police would unleash hell on protesters whose cause they did not endorse. It badly undermined the notion that any of this was about neutral principles of law, or difficult choices in hard situations. It was a choice.
Anyway, a pro-Trump caravan has stopped traffic on New Jersey's Garden State Parkway. But I haven't seen any reports that they've been tear gassed or maced -- probably because they're not presumed liberals marching to vote.

Everybody is seeing the difference. It's a choice.

Posted by David Schraub at 3:54 PM

Regarding police, it would be better to write, "whose cause they opposed". Clearly, the cops largely saw BLM protestors as enemies with a hostile cause. The corona protests, on the other hand, while probably not actively supported by many cops, weren't really perceived as something to oppose.