If you're aware of all internet traditions, you've undoubtedly heard of by now the idea of the "motte and bailey" style of argument. Basically, a "motte and bailey" occurs when one asserts a bold and controversial claim (the bailey), then, when criticized, recharacterizes one's position as something simple and uncontroversial (the motte). The idea is your true position is the (extreme, perhaps implausible) bailey, but if it ever comes under attack you retreat back to the (reasonable, common-sensical) motte. Then, once the attacking critics are gone, you go back to building up and promoting the bailey. 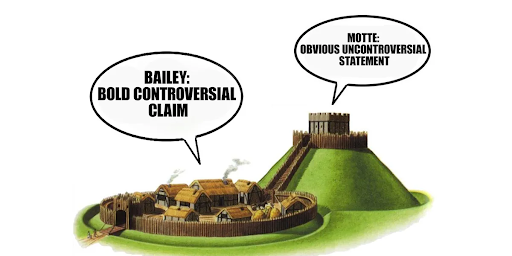 Here's a good example of the motte-and-bailey play. A few days ago, the Jewish Institute for Liberal Values released a white paper claiming that "critical social justice" and "critical race theory" promote, as a "reliable consequence" of their ideologies, antisemitism. Specifically rejecting as inadequate an approach that "tr[ies] to address specific acts of antisemitism from within the CSJ framework," the paper says flatly that "it is impossible to contain the antisemitism emerging from CSJ without rejecting the imposition of CSJ."  That's the bailey.
Then, under fire for not actually establishing that CRT or CSJ are in fact, promoters of antisemitism in any consistent fashion, JILV head David Bernstein retreats back to the motte.
He's fine with CRT, sometimes he even is a CRT-guy himself! When he says "it should be clear to anyone paying attention that Critical Social Justice ideology [including critical race theory] is fueling antisemitism," all he really has a problem with is "standpoint epistemology", defined as the view that "everyone else should defer to whatever ideological claims members of a minority group attach to their definition of racism." The problem isn't with "CRT", just how "some" people have "weaponized" the term in popular discourse.

I’m not arguing that CRT is inherently problematic. I use the the “crit” theoretical lens all the time. It’s really the package of standpoint epistemology that becomes so problematic https://t.co/TLKakPvJ54

I thought you were quoting me from a different article and in a different context. But please understand I stand by that statement. I don’t suggest it represents CRT theorist but rather the applied popular discourse.

This is where the discussion belongs: Looking at various factors and trying to make sense of them. I think that’s actively discouraged in current discourse. This is not a criticism of Derrick Bell. It’s a criticism of how these concepts are being weaponized by some.

That's a classic motte and bailey move. A sweeping claim that CRT/CSJ are dangerous ideologies fueling antisemitism and cannot be reformed from the inside retreats back to the anodyne and uncontroversial "I have no problem with critical race theory -- I like critical race theory -- I just don't think we have to agree with every view asserted by a member of a minority group, as 'some' people say I have to." Are these CRT-but-not-representative-of-CRT views -- asserted to be experiencing "rapid proliferation", "gaining ground and influencing public discourse" -- held by a non-negligible number of people? Listen, "It only took one guy to shoot up a Pittsburgh Shul."

This got me thinking: how often is one man's bailey another man's strawman?

I got on this subject upon being accused myself of engaging in a motte-and-bailey when I denied that the CRT movement, as a whole, promotes the sort of extreme versions of "standpoint epistemology" or what have you that Bernstein is furiously attributing to him. For my part, I claimed that the reason I wasn't defending the position that "everyone else should defer to whatever ideological claims members of a minority group attach to their definition of racism" is that attributing that position to crits is a strawman, and chopping those scarecrows down to size is not actually the same thing as successfully conquering a fort.

Folks will burn an army of strawmen to the ground and then give themselves a medal of honor for having successfully stormed the "bailey". https://t.co/rREs11YozQ

By not defending what I take to be extreme and implausible descriptions of what crits actually believe, I was said to have retreated to the motte from the bailey. My counter is that the crits never occupied the bailey in the first place -- the entire allegation is a strawman.

The related problem of the strawman is the problem of cherry-picking. In any academic discipline (or any pattern of public discourse), there will be some number of people who say and believe truly idiotic things (and a somewhat larger number who say things that sound truly idiotic if stripped from context and set to eerie, dramatic music). So the committed advocate can find, with little trouble, examples of some people actually asserting (or appearing to assert) the terrible, implausible position that is alleged to be a strawman.

Finding these examples doesn't actually demonstrate that the argument is widespread, or influential, or representative. For the honest interlocutor, the ability to cherry-pick these cases is not a substitute for actual, critical engagement with texts and evidence. There's a very large difference between the inferences we can legitimately draw from some rando assistant professor of media studies at Northwest Kansas Tech having a hot take versus, say, explicitly censorial legislation being passed in multiple states and becoming the centerpiece of a major political party's advocacy. But plenty of advocates are happy to graze from the cherry groves that will undoubtedly abut any argumentative fort -- picking the low-hanging fruit and patting themselves on the back for having successfully conquered the territory.

The terrain of bad argument, in other words, has more than just the motte and the bailey. It has strawmen -- built by the attackers but asserted with earnest fervor to be the actual bailey. And it has cherry groves -- the low-hanging fruit that can be plucked at to pretend a fringe, marginal view is actually an influential and representative one. When attacks on the strawmen and the cherry groves go undefended, the "victor" will claim their targets are engaging in a motte and bailey. But they're not -- they're watching as their interlocutor "attacks" a largely invented and uninteresting foe.

Posted by David Schraub at 7:35 PM