Yesterday, YIVO held a panel on "The Jewish press today", featuring top editors from the Forward, JTA, and Tablet Magazine. In the run-up to the panel, I suggested that the Tablet editor, Alana Newhouse, should be sharply questioned on why they continue to publish Liel Leibovitz. This was in the immediate wake of his article decrying synagogue COVID restrictions as a form of idolatry, but that was hardly his only offense, nor were Tablet's dodgy journalistic choices limited to Liel. Remember their alarmingly chummy interview with the infamous antisemite Kevin MacDonald? Or Lee Smith calling arrested 1/6 insurrectionists "political prisoners"? Or the article on California Ethnic Studies that highlighted a completely fabricated antisemitic quote?

In any event, I thought that, on a panel dedicated to the Jewish press, Tablet's representative should be asked about whether her choices adequately met the standards we should expect out of Jewish (or any) journalism. I wasn't alone. But I also got pushback. One of my longtime readers thought Newhouse would have an easy response to me:

imo she will tell you that she publishes a wide variety of opinions from various parts of the political spectrum and she doesn't believe in censoring voices bc leftists want a veto, and imo she will be correct in saying so.

"[In my opinion] she will tell you that she publishes a wide variety of opinions from various parts of the political spectrum and she doesn't believe in censoring voices bc leftists want a veto, and [in my opinion] she will be correct in saying so."
I suspect this is correct -- that is how the response would have gone. In a different article addressing yet another Tablet/Leibovitz journalistic controversy (where he accused the Forward of having "lost [its] mind" for reporting that Trump admin official Sebastian Gorka had ties to Hungarian neo-Nazi groups), Newhouse waxed lyrical on precisely these points. The backlash to the Gorka piece was reminiscent of "Stalinism", and no, they would not give in. She urged readers not to "isolate yourself inside an echo chamber where the only views you engage with are the ones you currently hold. Choose to read writers and publications that challenge your own biases—even, or especially, if your goal is to sharpen the overall positions and loyalties to which you already feel existentially committed." Tablet's critics "want to control ... what is permitted to even get close to our brains, because we can’t be trusted to think or feel for ourselves." But they will not yield in kowtowing to orthodoxy, or the demand that they limit the full diverse range of opinion expressed on their pages.
This move is of a certain genre, and the fellow-travelers in it are familiar with the lyrics. Bari Weiss' fiery resignation letter to the New York Times quoted Adolph Ochs' prescription that the editorial page be "a forum for the consideration of all questions of public importance, and to that end to invite intelligent discussion from all shades of opinion"; she decried a new "orthodoxy" which silenced any view that deviated from that of a rarefied elite. She had, immediately prior, written that if the Times refused to publish Arkansas Senator Tom Cotton's "send in the troops" editorial, it was effectively saying that "the view[s] of more than half of Americans are unacceptable." Agree or disagree, Cotton is representing a real perspective that needed to be grappled with.
One hears the refrain eloquently presented in the Harper's Letter, and far more crudely presented in the self-labeled knock-off "Jewish Harper's Letter", and echoed in every lamentation that free speech has been supplanted by cancel culture. I won't belabor the point -- the genre is familiar. But I do want to flag one more example I came across today, relating to The Nation's hiring of Mohammed el-Kurd as its new Palestine correspondent.
I have only passing familiarity with Mr. el-Kurd. I know of him wishing PTSD on every American soldier, and I know of him calling Zionism a "death cult", and I know of him calling for the removal of Israeli "colonizers" (given that he views all of Israel as a colonial entity, this can fairly be seen as a call for the forcible expulsion of all of Israel's Jewish population) and I know of him blasting Human Rights Watch for criticizing Hamas' "indiscriminate" rocket fire. This is a sampling of his oeuvre, not a full one, but I don't think a cherry-picked one either. He promises to bring to the table an authentic, angry voice of the Palestinian street which does not sugar-coat its indictment of Israeli and Zionist barbarism and sadism with dustings of "co-existence" or "acknowledging the pain of the Holocaust" or "of course terrorism is wrong." It is a real view, an authentic view, that isn't heard in (some segments of) western media.
Anyway, here is The Nation's statement on el-Kurd's hiring. 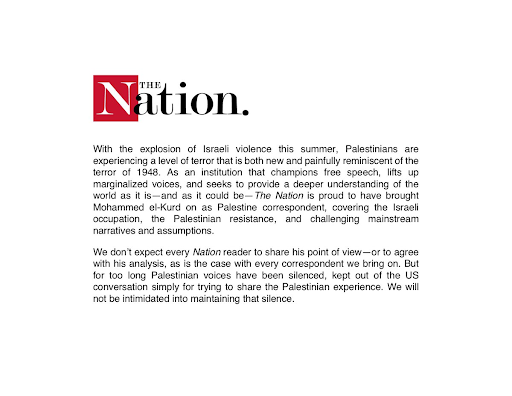 Reading the text, it checks all the genre boxes we already saw from Tablet and Weiss and their travelers:
Here's the thing: the reason this is a genre? Is because every value in that checklist is a real, genuine, important value. Free speech is important. Hearing from perspectives one doesn't agree with is important. Challenging mainstream narratives is important. Elevating voices not typically heard is important. And attempts to live out these important values can often be subjected to severe backlash that attempts to intimidate a platform out of entertaining the view, or to see it whittled down to the most palatable, soft pablum. Everything The Nation is saying here about preserving open discourse and dissenting views, is genuinely important, just as it is when Newhouse or Weiss or the JILV say it. The classics are classics for a reason.
But. Notice the way that The Nation's framing paints itself into a corner before it even begins. It makes its defense on structure, which has both the great advantage and disadvantage of bracketing entirely the question of substance. It applies with equal force literally no matter what the writer says -- the anodyne point crudely converted into an outrage by the frothing Twitter mob, the provocative point which makes even sympathetic readers cock an eyebrow but which nonetheless communicates a message worthy of pondering, and the outright racist or hateful or malicious false point that really should be grounds for editorial intervention. Indeed, at one level it tacitly thirsts for the most offensive, extreme, or unreasonable viewpoint -- for these are the ones through which one can truly show your steadfast will and iron resolve to stand with the beleaguered dissident against the roaring mobs. The provocateur is the point.
And so The Nation has effectively lashed itself to the mast -- now any accommodation to criticism or backlash means giving into intimidation, means "silencing" a dissident voice, means kowtowing to the mainstream, means betraying free speech itself. Having condemned them all as tools of censorship, The Nation cannot now easily access the normal tools of editorial oversight and judgment.
And that leads to tragic (journalistically speaking, anyway) consequences. When I found that fabricated quote in Tablet's ethnic studies hit piece -- again, a flagrant, no-bones-about-it falsification -- Tablet refused to issue a correction or acknowledge error. And at first, I couldn't figure out why. Why were they digging in? Why not just take the obvious L, acknowledge "this piece wasn't up to par", and move on? The answer I came up with, and I still think is the best explanation, is that it is the dark fruit of their "anti-cancel culture", "free speech" commitments -- it is the epilogue to the genre convention they're living out:

Persons who have drank of these waters believe we are overwhelmed with attempts at censorship, sugar-coating, and kowtowing to online gangs. For such persons, then, there is no greater betrayal, no greater cowardice, than acceding to the demand for a retraction. It doesn't really even matter if the claim under attack was justified or not; it ceases to be about defending the claim on its merits. The "principle", such as it is, is to stand up to the mob. Anyone who fails to do that is weak.

We cannot disconnect this from the sense of grievance which inspired some, albeit not all, of the popularity of the initial article. There is a segment of the Jewish community (and other communities) which views Ethnic Studies as so much PC claptrap, a sop to loud and angry minorities who want to silence anything and everything that doesn't present America as a bigoted hell-hole. They read the Tablet article and understood this curriculum as reflecting the ambitions of this cohort, they view the critiques of the article as Tablet being besieged by this cohort, and if the article was retracted they'd view Tablet as having been captured by this cohort. Ironically, Tablet's credibility with its readership (or at least large chunks of it), depends on them not correcting even obvious mistakes. Many of the folks who couldn't care less about the realities of the California Ethnic Studies Model Curriculum (the author of the article now forthrightly admits that it doesn't matter what's in the curriculum; she thinks it's a poisonous idea no matter what it teaches) would never forgive Tablet if seemed to be giving in to "the left" (whatever that means).

One can predict a similar dynamic here. When a goodly chunk of the appeal of your writer is that he gets the right type of reader to "stay mad", and when you've already staked your credibility on the idea that it would be a failure of ethics, a betrayal of journalism and free speech itself, to give an inch to anyone who is mad, then it doesn't really matter why people are mad. It's already baked into the cake that they will be mad, and that that's their problem. It's not just a matter of "they knew who he was when they hired him." The entire discursive framework they used to promote his hiring now would make it impossible to disavow him, any more than Tablet could disavow a factually wrong smear on an Ethnic Studies article without losing its "anti-woke" cred.

How can this all work? Well, it is, after all, true -- and by no means irrelevant -- that many readers (on this subject and quite a few others) do get and stay mad for partisan, biased, or outright stupid reasons, and a journal which lacked the backbone to tell those readers "sorry, but you're going to have to stay mad" isn't going to be doing its job. Again, the classics are classics for a reason. But that truth offers a refuge to hide from a different truth, which is that sometimes the mad readers are mad for good reason, to which the rote appeal to "free speech" doesn't suffice as a response.

Lashing yourself to the mast of this particular "free speech" genre certainly comes with some benefits, and it shouldn't surprise to see this move appear across the political spectrum. But it is not always virtuous, and it is never cost-free.

Posted by David Schraub at 9:28 PM