Voting Isn't Enough. You Also Have To Vote Enthusiastically

For the past several years, a battle has raged within the progressive commentariat about the importance of voting. In 2016, quite a few influential left-of-center figures were very public about how they would sit the election out, or vote third party, because they just could not bring themselves to support Hillary Clinton. This approach is sometimes dubbed the "consumerist" theory of voting, where politicians are products you either like or don't like, and if you're not happy with the product, you don't buy it. 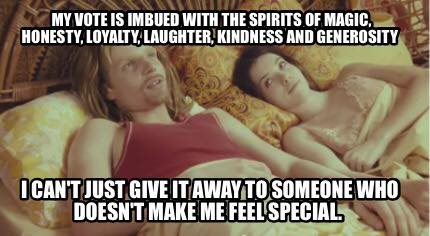 This approach seemingly was discredited by the 2016 election results (spoiler: it was also discredited before the 2016 election results), though a surprising number of people were insistent for years thereafter that they were entirely right and correct to sit out 2016. Voting is for suckers, voting doesn't change anything, voting is a distraction from something something grand proletariat revolution something. Incredibly, we're still seeing a permutation of this argument now, as people respond to Republicans reaping the fruit of their electoral success by literally arguing "I tried voting in 2020 and it didn't work". I barely know how to even respond to that level of narcissistic self-indulgence. Politics is hard. It's slow, and arduous, and often a game of inches, but it definitely won't be won by people who think that the failure to travel lightyears in a day means they're entitled to sit out in protest.

That said, over the past few days I have noticed a bit of a shift amongst people I'd broadly define as occupying these sectors of progressive politics. They no longer say they won't vote in 2022. Instead, they issue long screeds contemptuous of voting and decrying voting and insisting that voting won't bring any useful change or benefits whatsoever. Then, somewhere in the middle of the diatribe, they will, with all the enthusiasm of a petulant child, agree that they will vote in 2022, but they won't like it and you can't ask them to like it, but if it will finally make you shut up okay they'll agree to vote.

Progress, of a sort. But not good enough.

The consumerist theory of voting treats voting as a matter of individual expression. This new permutation still fits that mold, only now voting only matters as a sort of civic duty checkbox one individually marks off (albeit reluctantly).

But the reason voting matters isn't to express your deepest emotions nor is it to validate one as  having satisfied an individual civic duty. The reason everyone is saying voting matters is because we need to win these elections in order to secure the changes we want, or at the very least to prevent things from deteriorating even worse. Democrats retaining control of government in 2022 might not be sufficient to arrest the damage the Supreme Court is doing to our public life, but it sure as hell is necessary. So your obligation isn't just to vote for Democrats, it's to take the steps necessary so that Democrats win. And one such step is projecting a sense of excitement about the prospect of Democrats winning.

("Excitement", to be clear, is being used here as a somewhat imprecise catch-all term encompassing any number of affective dispositions towards Democrats winning that view that outcome as a substantial positive and the opposite outcome as a substantial negative. So I would count "excited at Democrats winning" and "terrified at Republicans winning" as both falling into the relevant category; either way, someone who affectively holds those views should be enthusiastic in pulling the lever for Democrats come November. Perhaps "motivated" is better than "excitement"; insofar as it captures the sense that you care, deeply, about the outcome of the election. In any event, I doubt it matters too much what exact form that affective disposition takes, so long as it is in this broad category of substantial positive, as opposed to the sulky "I'll do it but it won't matter").

It is a truism to say that one vote rarely makes a difference. Voting matters as a collective endeavor where we unite to exercise power and self-determination together. Our decision to vote, and whether we do so enthusiastically or view it as a grim chore, influences those around us, and so has a multiplier effect that extends will beyond our one vote.

People are more likely to vote if their friends and neighbors vote, and they're even more likely to vote if their friends and neighbors are excited about voting. Anybody who is talking about voting on Twitter almost by definition is on the bleeding edge of heightened political engagement, which in turn means they are well-positioned to influence multiple others in their circle who are more likely to fall towards the fat part of the bell curve of political apathy and are highly responsive to cues from their social environs. Your vote matters, but your affective disposition towards voting as a means of effectuating change also matters and arguably matters even more. Every voter has one vote, but the publicly excited voter carries in their wake the votes of a dozen friends and acquaintances. The publicly downcast and reluctant voter sheds a similar number of votes.

"I'm sorry, but I can't fake enthusiasm." Yes, you can! You shouldn't need to, in many ways I'm blown away that anyone needs to "fake" feeling positively disposed to Republicans not gaining another hammerlock on power, but yes, you absolutely can fake enthusiasm. Indeed, I'd argue that in the present moment it's self-indulgent not to. You're willing to call for a general strike but you're not willing exaggerate a smile to win an election? Are you kidding me? Sulking is not a strategy.

Voting is a tactic, and our obligation now is to take the steps most likely to make that tactic successful. One of those steps is being publicly enthusiastic about voting, so that other people who are less politically engaged than you also find the prospect of voting to be something worth doing. My basic rule of thumb here is that if you're politically engaged enough to be publicly complaining about how unfair it is that people are asking you to vote again, after you already tried that two years ago, then you're politically influential enough to carry the responsibility of publicly orienting to voting in such a way so as to maximize its likelihood of success.

This doesn't mean one doesn't pressure Democrats to do more or do better when they have power. I have hardly been blown away by the immediate Democratic response to the fall of Roe, though in part I think that's because Dobbs was a huge defeat and huge defeats are rarely pretty. There is no elegant way to lose in crushing fashion (I view the chaos after the Afghanistan withdrawal in much the same way). Nonetheless, I do not at all dispute there are plenty of criticisms one can make at the Democratic leadership in their immediate response to Dobbs. But it is entirely possible to level these critiques while also maintaining an affective disposition of strong positivity towards Democrats winning elections. Every bit of frustration I have towards Democratic decisions while in office - and there are plenty -- has not dampened in the slightest my strong and unwavering view that Democrats winning elections is far, far better than Democrats losing elections, and that we should view any moment where Democrats win and Republicans lose with absolute elation.

And guess what? Enthusiastically voting doesn't stop you from enthusiastically going to protests, or enthusiastically supporting a mutual aid organization, or enthusiastically engaging in a union drive, or enthusiastically taking any number of other steps which might also be part of the collective endeavor of building power to effectuate positive change. It's not either/or, nobody is arguing that it is either/or, and using that false dichotomy to justify your sulky attitude towards participating in electoral politics isn't fooling anyone. So buck up, and get excited about winning in 2022. Fake it if you have to, or do what I do and find genuine enthusiasm for the prospect of fending off America's slide into fascism. Either way, you do what it takes to win.

Posted by David Schraub at 5:35 PM