Parodying While Minority: The Burden of "Black and Jewish"

A few weeks ago, I read another article (in the UK's Independent) about the latest set of antisemitism controversies in the UK's National Union of Students. There is a lot -- a lot -- that could be written about antisemitism in the NUS, and most of the article struck me as entirely fair play. But one of their examples was the following:

Meanwhile, another current NUS officer, LGBT+ Officer Noorulann Shahid, who uses the pronouns they/them, posted a link on Twitter to a comedy video that includes a number of anti-Semitic tropes and said they had “laughed out loud” at the clip. 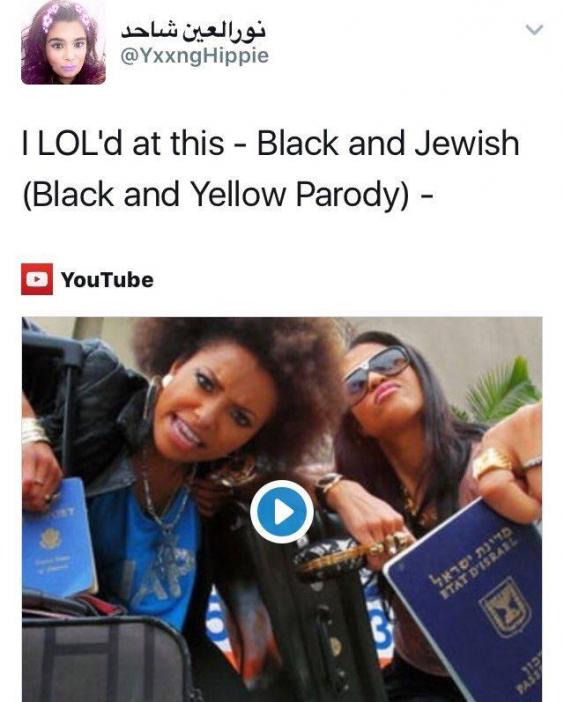 The video, titled “Black and Jewish”, is a parody of rapper Wiz Khalifa’s song “Black and Yellow” and makes jokes about Jews having big noses and being stingy. It features two black women dressing up in traditional Jewish attire and singing lyrics including “my ass and nose, they’re both big” and “don’t spend no money but you know I’m rich”. The tweet dates from 2012.

I remember seeing this video when it came out. I thought it was funny (though not uproariously so), and not particularly offensive. Clearly others disagree. But there's one aspect of this video that was completely overlooked in The Independent's coverage (and virtually all the other stories I've seen):

Both of the black women in the video -- Kali Hawk and Kat Graham -- are Jewish.

It is initially notable that, despite the title of the video being "Black and Jewish", it did not seem to occur to the authors that the artists were, indeed, Black and Jewish. They just assumed that the women were dressing up in foreign cultural attire and mocking Jews. So, as a commentary on the erasure of non-White Jews, this story seems to capture that in a very literal sense. And lest we think this is only a function of an ignorant non-Jewish media source, Algemeiner (which ought to know better) also alluded to Shahid "shar[ing] a video that includes tropes of Jews being stingy and having big noses."

But beyond the failure to recognize the existence of Black Jews, I think there's also a more subtle form of marginalization in play here. It's not that Jews cannot make antisemitic remarks. But jokes like "my ass and nose, they're both big" are hardly far removed from Woody Allen-esque self-deprecation that has long characterized Jewish humor. And such self-deprecation, in turn, has long been a coping mechanism for Jews and other outgroups -- we dissipate the power of hurtful stereotypes by mocking them or applying them tongue-in-cheek.

Yet my strong suspicion is that if you're a minority-within-a-minority, that release valve can be closed off. There's much greater pressure to be, not just hyperauthentic, but hyper-earnest about it all in a way that I can only imagine must be maddening. Again, their participation in a rather ordinary form of self-parody is taken to be not an act of Jewishness but an act of antagonism towards their Jewishness -- in a way I don't think would happen if they had a background and an appearance more like, say, mine.

If, as one might say, certain jokes or mockeries are "ours" (as in I can mock Jewish noses, but you, the goyish reader, most certainly cannot), that raises the question of whether Hawk and Graham are really included in the "our". To the extent their Blackness renders their Jewishness permanently provisional, that functions as an exclusion from the full expression of their Jewish identity. Ironically, the demand that they constantly prove themselves authentic Jews (in a way that, say, I rarely am asked to do) operates to make that request impossible to meet.
Posted by David Schraub at 6:29 PM