Hold It: Now Jews Talk About Antisemitism Too Little?

I don't really want to join the pile-on that greeted Jonathan Weisman's NYT column wondering why, in his view, American Jews aren't calling out antisemitism enough. If you'd like, here's commentary from Allison Kaplan Sommer and Andrew Silow-Carroll, as well as a follow-up interview Weissman did with the Forward.

I've actually written some things which might be thought of as in alignment with Weisman's thesis, e.g., praising the ADL but calling out other Jewish groups for going soft on Steve Bannon (the terrible revelation that many Jewish orgs kept quiet specifically to avoid alienating conservative donors would also fit very well here). That said, I think the story of whether Jews are or aren't sufficiently calling out antisemitism in America and globally is a complicated story; I don't think the answer is pat

But for now, all I want to add is this: How can we write a column on this subject, where the thesis is "Jews talk too little about antisemitism", without even acknowledging the trope that Jews talk too much about antisemitism? Isn't that the more pervasive stereotype? Certainly, it isn't dead yet -- as I found out a few years ago at an academic conference:


The folks questioning me seemed to think that the debate we were having was whether anti-Semitism is raised too often or just the right amount. But I don't think anti-Semitism is talked about the right amount; I think we talk about far too infrequently.... For all we have convinced ourselves that it is easy to cry anti-Semitism, that Jews don't have qualms about doing so when it's false let alone when it's real, the reality is far different. Pretty much all the Jews I know, especially those left-of-center (which is to say, most Jews), are keenly aware of the costs of anti-Semitism talk -- that each time they try to raise the subject (no matter the context or validity), they are feeding into this narrative of "there they go again."

A good chunk of the comments responding to the (very good) Trayon White apology this past week also were in this vein -- "look at the Jews, crying antisemitism just because someone says the Rothschild's control the weather!"

Just like conservatives started on "colleges indoctrinate impressionable youths with obscene smut and Marxist propaganda" and skipped on over to "colleges shield snowflake youths from controversial ideas and difficult viewpoints" without seeming to miss a beat. somehow we've hopped from "Jews always talk about antisemitism" to "Jews never talk about antisemitism" without even acknowledging the shift.

As it happens, I think I more-or-less agree with Weisman in that I think Jews aren't particularly vocal about antisemitism and that we should be louder on the subject. But one of the more plausible explanations for that observation is that Jews have grown gun-shy on raising the issues for fear of supporting the omnipresent narrative that Jews are too vocal and too loud on the matter. I find it baffling -- bordering on bizarre -- that one could write a column (hopefully not a whole book!) on this subject and just skip over that stereotype entirely.
Posted by David Schraub at 6:39 PM No comments:

A new, very depressing study finds that women applying for jobs are penalized (compared to men) for getting good grades in college. Basically, employers value competence in men but likability in women, and so they reward men for getting better grades (associated with competence) while viewing high-achieving women with skepticism (assuming they're less likable). The effect is strongest among women majoring math, because of course it is.

Quote of the Day: Nozick on a REAL "Powerful Argument"

No joke, I had remembered Nozick said something like this but couldn't remember the exact quote -- then spent forever searching for it fruitlessly before someone completely randomly posted it on twitter today.

For the record, it's from Robert Nozick, Philosophical Explanations (Cambridge: Harvard UP 1981), p. 4.
Posted by David Schraub at 1:22 AM No comments:

The political theory class moves onto its feminism unit. I thought about recommending my students read Kate Manne's fantastic book Down Girl: The Logic of Misogyny -- after all, I'm in it! Upon reflection, telling my students that I'm "in" a book about misogyny may be a bad idea unless I provide considerably more context about the nature of my inclusion (I was discussant when she presented a chapter of the book at a Berkeley workshop; she was also generous enough to cite to my "Playing with Cards" article).

New Voices (a periodical promoting young Jewish writers) has a piece on Mizrahi Jews trying to find space for their stories in generally-Ashkenazi-dominated campus Jewish spaces.

Study: Middle School students (of all races) prefer teachers of color. Suggestive that implicit biases aren't as prevalent among tweens and young teens? Or that teachers of color who manage to overcome racialized barriers and mistrust to reach and keep their positions are particularly talented?

Oregon judge suspended after, among other things, putting up a picture of Hitler in his courthouse's "Hall of Heroes" (he also refused to marry same-sex couples, tried to use his judicial status to intimidate a youth soccer referee, and allowed a felon whose case he was adjudicating to handle a firearm in his presence).

BDS activists in Spain are suing an anti-BDS watchdog for "intimidation" stemming from the latter's successful legal efforts to overturn BDS ordinances passed in various Spanish municipalities. A judge is allowing the lawsuit to proceed. While there's something unnerving about a suit claiming that the counterparty winning discrimination suits constitutes a form of "discrimination", I try not to jump to conclusions about the meaning of pre-trial rulings in foreign legal cultures, because I have no idea what the relevant legal standards of review are in (in this case) Spain. So grain of salt.

Trump Secretary of State nominee Mike Pompeo is deeply tied to anti-Muslim bigots. There's a special place in hypocrisy hell for those in the Jewish community who went all-in on Tamika Mallory for her ties to Louis Farrakhan last week who back Pompeo this week (RJC, looking at you).

Professors in the Geography Department at the University of British Columbia successfully pressure their own students to cancel a gala that would've been held at the campus Hillel space. The gala would not (to my knowledge) have been Israel (or Jewish-related). Hey, I remember when we went through this at Brown!
Posted by David Schraub at 1:43 PM No comments:

Yesterday, two separate people texted me asking if I'd see the D.C. Councilman, Trayon White Sr., who blamed the Rothschild's for manipulating the weather in Washington and causing recent snowstorms. And I'm like -- dammit, I just wanted to enjoy my weekend. But alas:


“Man, it just started snowing out of nowhere this morning, man. Y’all better pay attention to this climate control, man, this climate manipulation,” he says. “And D.C. keep talking about, ‘We a resilient city.’ And that’s a model based off the Rothschilds controlling the climate to create natural disasters they can pay for to own the cities, man. Be careful.”

Okay, first of all, as a long-time resident of the DC metro area, I can attest that I don't care one bit about snowfall -- the weather pattern that's worth developing a conspiracy over is our 95 degree/9000% humidity summers. That's hell on earth. Second, I don't think we've had a weather-related entry in this series since Jews created the tsunami that hit the Fukushima reactor in Japan, so way to give us a throw-back!

Anyway, because I'm old and slow and can't respond to things how I used to, I wasn't able to blog on this until after Councilman White issued his apology. 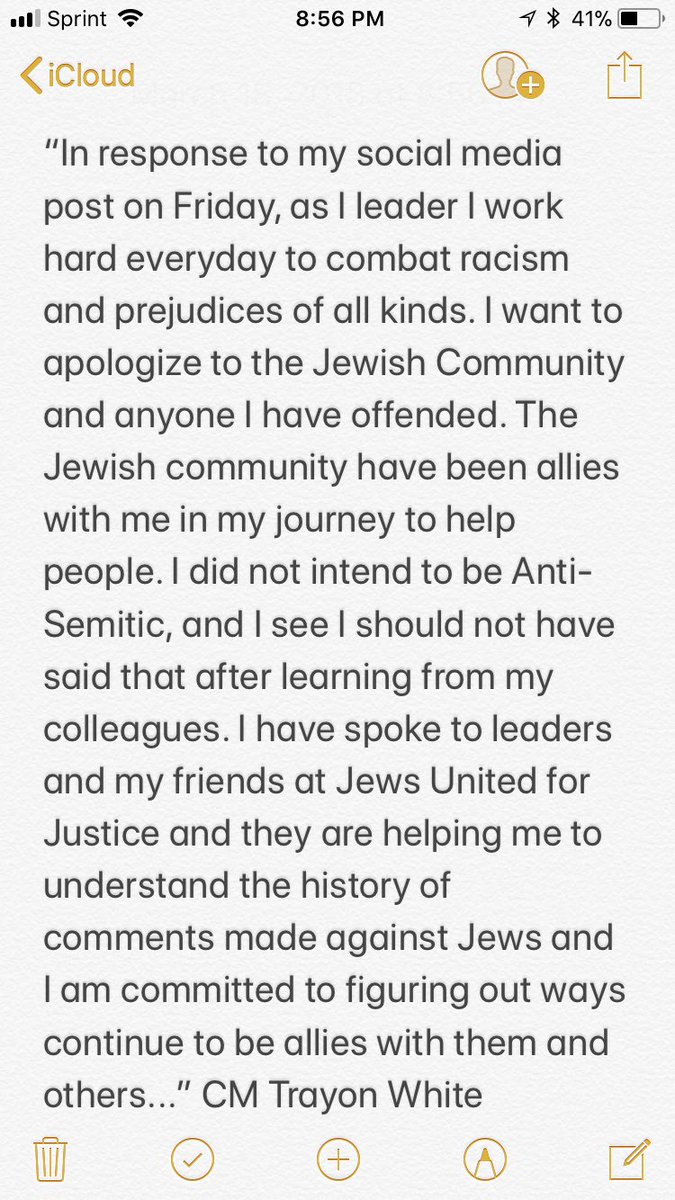 I actually really like this one. Let me explain why.

The first reason I like it is based on something perhaps not evident in the four corners of the apology itself, but which I've confirmed from other sources: White took it upon himself to reach out to Jews United for Justice (a DC-area Jewish group) to ask them what he had done wrong and how he should make amends. Now, just to be clear, this is not an "I-have-Jewish-friends" defense (that's bad). It wasn't even "after Jews reached out to me, I realized I was wrong" (better). It's "after realizing I hurt them, I took it upon myself to take the initiative and reach out to Jews to figure out what I should do better" (best).

But the bigger reason I like it is that it commits to the idea that White needs to learn. Yes, we can roll our eyes at the prospect that someone is utterly unaware of how "Rothschild" stands in for antisemitic conspiracies. But even if they somehow managed to be ignorant on the subject, that's no excuse unless it's coupled with a recognition that one clearly needs to learn more if one is to be a good ally to Jews. And that's what this apology does quite well. It speaks of how JUFJ is "helping me to understand," and that he is "committed to figuring out ways [to] continue to be allies with them." It doesn't claim that he's already exemplary on the subject, and that the video was some inexplicable blurt that shouldn't sully an otherwise perfect record. The contrast to, say, the Harvard Law Student who gave a decent apology for allegedly inadvertent antisemitism but didn't indicate that he thought he had more to learn on the subject is striking, and cuts strongly in White's favor.

One thing that it is often hard to remember for for those of us committed to fighting antisemitism is that our end-goal isn't to fight antisemitism, it's to beat it. And one corollary of that goal, then, is that any campaign against antisemitism worth its salt has to account for -- indeed, actively desire -- the possibility that some people who said or believe genuinely antisemitic things will, at some later date, change their minds. Put another way, we have to have strategies through which, when encountering antisemitism, we actually change minds. Naz Shah is a great example of how much power can emerge when this works.

I'm not saying that Councilor White has earned his stripes yet. That remains to be seen based on what he does going forward; one apology (even a genuine one) issued in the moment will not and should not suffice.