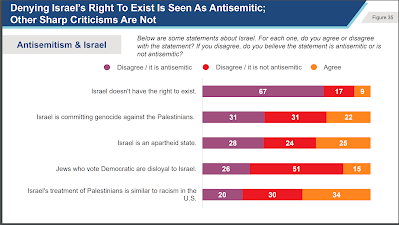 The huge outlier here is "Israel doesn't have a right to exist."  That statement simply blows all of its competitors out of the water -- a full two-thirds of American Jews find it antisemitic when no other statement (even some highly inflammatory ones about "genocide" or "apartheid") pushes much higher than 30%. It also has far fewer Jews agreeing with it, suggesting that "Israel has no right to exist" is viewed differently even by the nation's harshest critics. It's not, in other words, just a shuffling among Israel's supporters -- the other statements are disagreed with but aren't viewed as antisemitic; this one is disagreed with and is viewed as antisemitic. There appears to be a substantial portion of the American Jewish community that agrees with statements like "Israel is committing genocide" who nonetheless draw the line at "Israel doesn't have the right to exist."

The "Context" of Tlaib's PEP Talk Before American Muslims for Palestine

At a forum hosted by the group American Muslims for Palestine, Rep. Rashida Tlaib (D-MI) made waves by declaring that supporters of "Israel's apartheid government" cannot be allowed to call themselves progressive. The full quote is below:

"I want you all to know that among progressives, it’s become clear that you cannot claim to hold progressive values, yet back Israel’s apartheid government, and we will continue to push back and not accept that you are progressive except for Palestine."

Unsurprisingly, this is garnered quite a bit of pushback from many Democrats (especially Jewish Democrats), who contended that there was nothing incompatible with supporting "Israel’s right to exist as a Jewish and democratic state" (to quote Rep. Jerry Nadler (D-NY), criticizing Tlaib) and being progressive.

Now, in fairness, there is some ambiguity around the precise phrasing: backing "Israel's apartheid government" (Tlaib) could be distinguished from, e.g., a more general belief that Israel should not exist as "a Jewish and democratic state" (Nadler). Perhaps the former is about specific policies, while the latter is more conceptual and metaphysical. How far, in other words, does Tlaib's view actually extend?

We can't, of course, know for sure. But perhaps the venue offers a clue. Rep. Tlaib said these words at an event hosted by American Muslims for Palestine. Last year, AMP produced a comprehensive document "intended to provide the American-Muslim community with a set of criteria by which to determine whether or not to work with various Jewish organizations" (emphasis added; they were clear that the subject of the memo was specifically the Jewish community). And AMP's conclusion was that Muslims who support Palestine should refuse to work with virtually every Jewish organization, on any subject, for any purpose. Not the ADL, not the AJC, not local JCRC or JFeds, and not even most synagogues (a list totaling about two dozen synagogues nationwide were whitelisted as permissible). A nearly absolute, totalizing attempt to extirpate the entirety of the Jewish community from fellowship or coalition.

That is context. Does it decisively establish that Tlaib, herself, thinks things should go that far? No. But under circumstances where it has already become clear that the train has no brakes, it is legitimate context for discerning where this line of reasoning will take us. Context isn't always exculpating, after all.

Posted by David Schraub at 7:24 PM No comments: