Liberal challenger Jill Karofsky ousted conservative incumbent Justice Daniel Kelly, slicing the right-wing majority on the court to a 4-3 margin. The race was heated because state Republicans insisted that it must go on as scheduled in spite of the coronavirus epidemic making voting positively dangerous, then fought tooth-and-nail to make sure as many absentee ballots went uncounted as possible (they got an assist from the U.S. Supreme Court on that one). All this notwithstanding, Karofsky ending up winning by 10 points -- a frankly crushing margin given the history of Wisconsin statewide races and the fact that she was a narrow underdog. Some of the county data coming from this race -- Karofsky winning Kenosha County, for instance -- will undoubtedly make state Republicans very nervous about November (and it should).

For his part, Justice Kelly is best known around these parts for authoring perhaps the worst argument I've ever seen against affirmative action. It managed to standout for incompetence even in the hyper-competitive "comparing racial justice measures to slavery" arena, which truly is something.

Of course, the person Kelly replaced literally tried to choke out one of his colleagues, so he still might have been a step up given who came before. Fascinating place, the Wisconsin Supreme Court is. Anyway, I fully expect Judge Karofsky to continue that positive momentum and be a force for good and the rule-of-law in her tenure on the Court.

Posted by David Schraub at 10:00 AM No comments:

What We Owe To Each Other: Democratic Unity Edition

The vast majority of Bernie Sanders primary voters intend to vote for Joe Biden in the general. Indeed, it isn't even all that begrudging: a majority of Sanders supporters view Joe Biden favorably. It is easy to be mislead by a loud, raucous, but ultimately small online minority.

Still, as the primary season concludes and we pivot to the general, we are seeing claims and counterclaims from the erstwhile Sanders and Biden camps regarding what each one now expects from the other. Sanders backers are demanding to be courted and that their vote be "earned". Bidenites are crowing about how they won and that anyone who doesn't back Joe come November is a fascist enabler.

As it stands, this is not a productive conversation. But as we emerge from another harsh primary, we should be think about what we owe each other in the service of unity and making Trump a one term president.

To that end, I suggest the following things we can reasonably expect out of each camp:


On a lighter note, the need for Democrats to be cheerful and enthusiastic and united and optimistic brought to mind some old Boondocks comic strips way back from 2004. 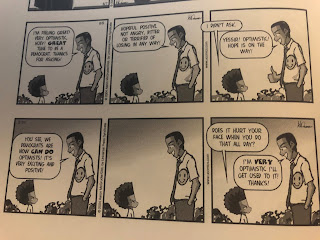 Posted by David Schraub at 10:30 PM No comments: