A non-exhaustive list (though I, personally, am quite exhausted):

Some of these are, in isolation, at least marginally interesting questions, but the degree to which they are constantly dominating my Twitter feed -- and admittedly, that's in no small part due to selection bias re: who is on my Twitter feed -- is absolutely draining. Marginally interesting as they may be, these are sub-sub-tertiary questions that often are treated as the critical geopolitical fulcrum around which all other Russia/Ukraine debates must revolve, and I just can't.
Anyway, since they're apparently inescapable in my neck of the internet woods, here are my very quick answers, with the caveat that I probably won't expand on any of these because -- again -- they're of sub-sub-tertiary importance and my opinions simply do not matter that much.
Posted by David Schraub at 7:05 PM No comments:

The Right To Be Wrong in Claiming Antisemitism

Is it necessarily problematic when people make "wrong" claims of antisemitism?

"Wrong", of course, is not a synonym for "intentionally false", "malicious", or "bad faith". A "wrong" claim of antisemitism is one that, we will stipulate, is sincerely believed and not facially absurd, but which following our best sincere investigation we conclude is ill-taken.

This is something I initially started thinking about in the context of folks calling Amnesty's "apartheid" report on Israel antisemitic. Many responded to those claims by objecting to the very question -- it was "chilling" or "silencing" to make that allegation, even if (as was often conceded) one could legitimately disagree with the conclusion Amnesty came to that Israel was an apartheid state. I thought about again in the context of this letter signed by several University of Toronto faculty members, condemning a university colleague for promoting the IHRA definition of antisemitism (a definition the letter-signers think is wrong and incorrectly labels as antisemitic innocuous criticism of Israel). The letter doesn't just say "here is why we think IHRA is wrong"; it suggests that the choice to adopt an understanding of antisemitism the letter-writers disagree with is facially problematic.

This struck me as an interesting formulation. In the Amnesty example, it suggests that it is not problematic for Amnesty to call Israel an apartheid state even if that conclusion turned out to be incorrect (Amnesty is "allowed" to be mistaken), but it is problematic for Amnesty's critics to call Amnesty antisemitic unless they've got the organization dead to rights (there is no tolerance for being "mistaken"). One could, after all, say to the critics of Amnesty's critics "it's fine to disagree with the contention that Amnesty is antisemitic, but don't preemptively dismiss the claim as facially illicit" -- which is, of course, the same structure urged for responding to Amnesty's claim of apartheid. We can agree or disagree that Israel is an apartheid state, we can agree or disagree that Amnesty is an antisemitic organization, but our ultimate evaluation of either question will not suffice to preemptively invalidate assertions positing contrary conclusions.

So what is it about putatively "wrong" antisemitism claims that makes it different in kind from putatively "wrong" apartheid claims? I'm not sure what could legitimately account for the difference. If, for example, the argument against "wrong" accusations of antisemitism is that the term is so explosive and earth-shattering that it must only be deployed in cases where the claimant absolutely, positively, has the goods, one could say the exact same thing about claims of "apartheid".

Next week, I'm presenting at a conference on law and antisemitism at Indiana University on the subject of "epistemic antisemitism"; a core theme of the paper is on how, by restricting "legitimate" antisemitism claims to only those which are "clearly" correct, we end up sabotaging the ability to conduct the discourse at all. In a political context, antisemitism claims are virtually always going to be contested; there will be arguments and factors that push in favor or against the label. In these circumstances, there has to be a gap -- I'd say a somewhat sizeable gap -- between circumstances where we conclude that a given claim is incorrect and circumstances where we conclude that leveling the claim is a form of abuse.

In general, political conversation cannot occur if there is no room to be wrong. Political conversation is a series of people making claims, and many of them will turn out following discussion and investigation to not hold water. If that outcome preemptively delegitimizes the initial conversational gambit, the entire project comes to a screeching halt and quick. As tempting as it is to say that people should only make claims of "antisemitism" (or "apartheid", or "racism") when they are right, there is no universe in which free discussion of such ideas can occur without some instances of the claims being wrong. A system which allows for no false positives, even at the initial claim-formation stage, is one that will endure near-infinite false negatives.

All of this, of course, was the impetus behind one of the jokes I made about the "trans-left unifier": They insist that calling anti-Zionism "antisemitism" is an outrageous conflation that suppresses discourse, while calling Zionism "White supremacy" is a legitimate position we must respect. That sort of disjuncture, where Jews are told over and over again "even if your instinct is to disagree, you have to allow the argument to be made" for every hostile appellation given to Israel, whereas if they give a non-conforming argument about antisemitism they're accused of poisoning the conversational well, is tremendously frustrating and I think theoretically unsustainable. "Antisemitism" is like any other claim -- sometimes it will be right, sometimes it will be wrong, we figure it out by considering it carefully, and the fact that some of those careful considerations will yield the conclusion of "the claim is wrong" does not, on its own, demonstrate that it was a foul to have proffered the claim in the first place. 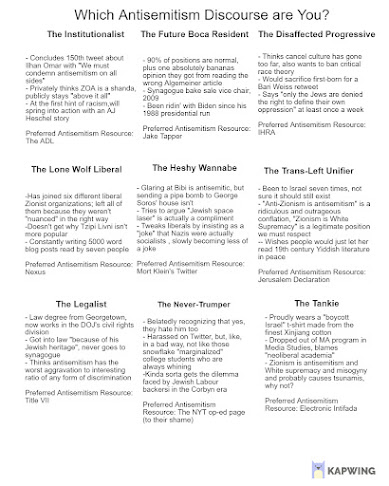 Posted by David Schraub at 3:43 PM No comments: